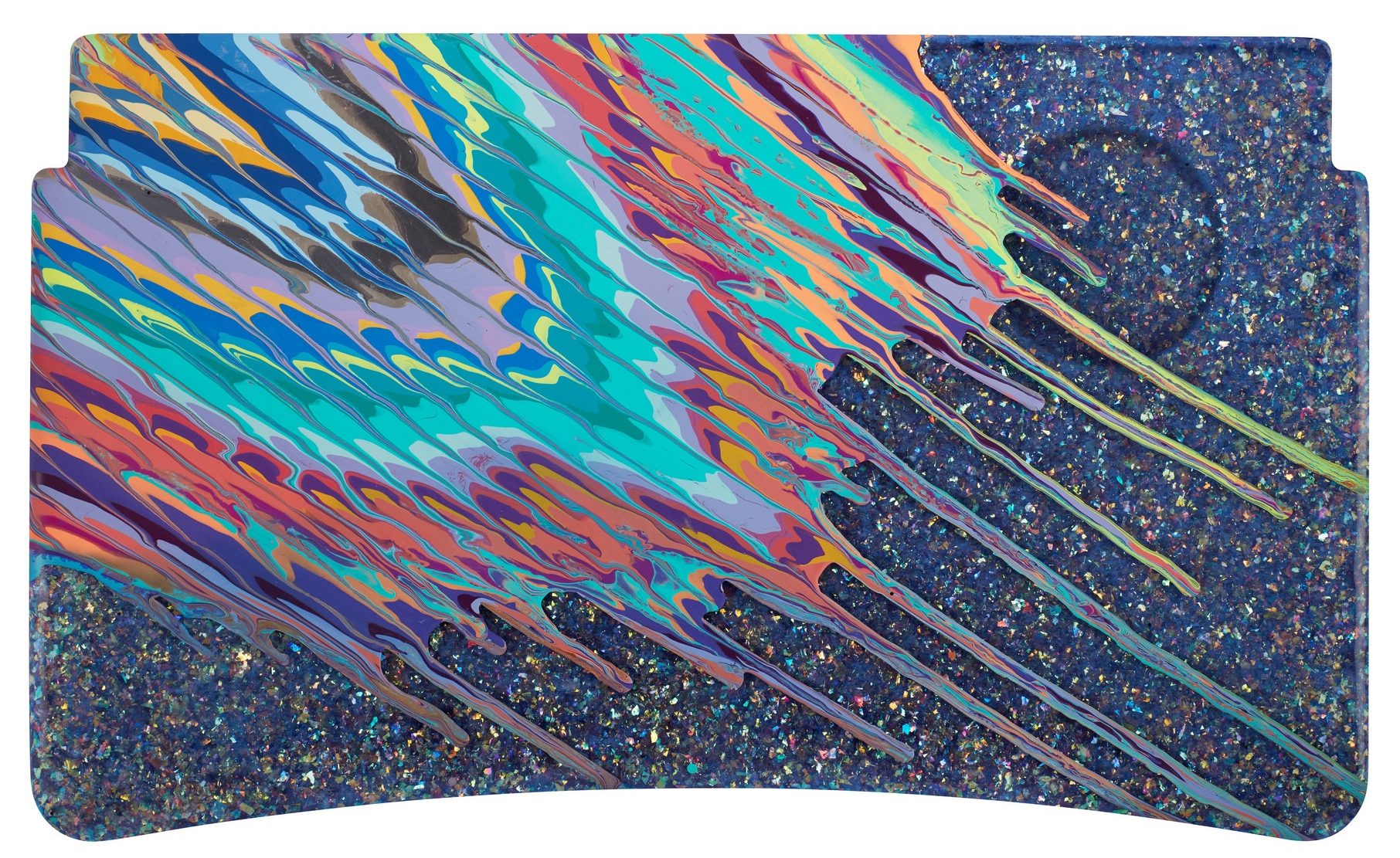 Art in the air: Delta and Coca-Cola have come together to create an art gallery in the sky by installing aircraft tray tables decorated by famous designers. Hannah Hastings reports

Anyone who has booked to fly with US airline Delta this year may find their tray tables more eye-catching to look at than usual during meal times. In a special project in partnership with Coca-Cola, Delta has brought together 12 artists from around the world to revitalise the fold-out trays on one of the carrier’s B767 aircraft.

Each artist was tasked to draw inspiration from the airline’s most popular destinations, while focusing on the themes of optimism, travel, refreshment and happiness. The cities illustrated were: Amsterdam, Atlanta, London, Los Angles, Mexico City, New York City, Paris, Sao Paulo, Seattle, Seoul, Shanghai and Tokyo.

American designer Adam Pinsley, for example, was responsible for Atlanta’s table tray. Pinsley used real jet-paint for his signature drip-art style to blend the signature colours of Delta and Coca-Cola in celebration of the company’s city headquarters there.

The artists shortlisted by Delta and Coca-Cola for their unique creative styles have each produced vibrant designs. What usually is a blank space to prop your coffee on is now a stunning selection of colourful artworks that can serve as a visual feast for travellers flying at 35,000 feet.

Those who wish to see the original tray table designs can find them on display at Atlanta’s Hartsfield-Jackson International airport at Concourse A between gates A11 and A15. Highlights also include video footage of the artists at work and other behind-the-scenes features.

If only all tray tables looked like these ones from Delta… 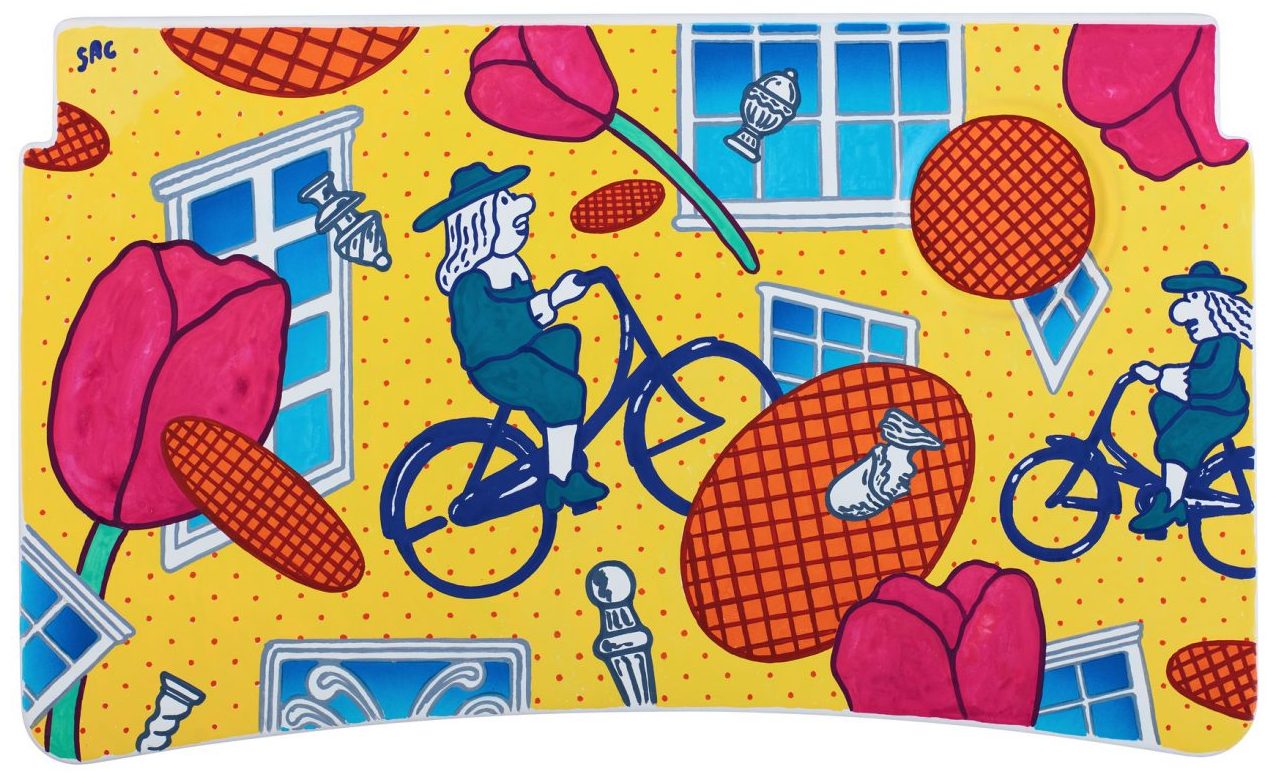 Adam Pinsley (ATLANTA)
A designer in Delta’s creative department, Adam used jet paint and his signature drip-art style to blend the colors of Coca-Cola and Delta in this tribute to Atlanta. 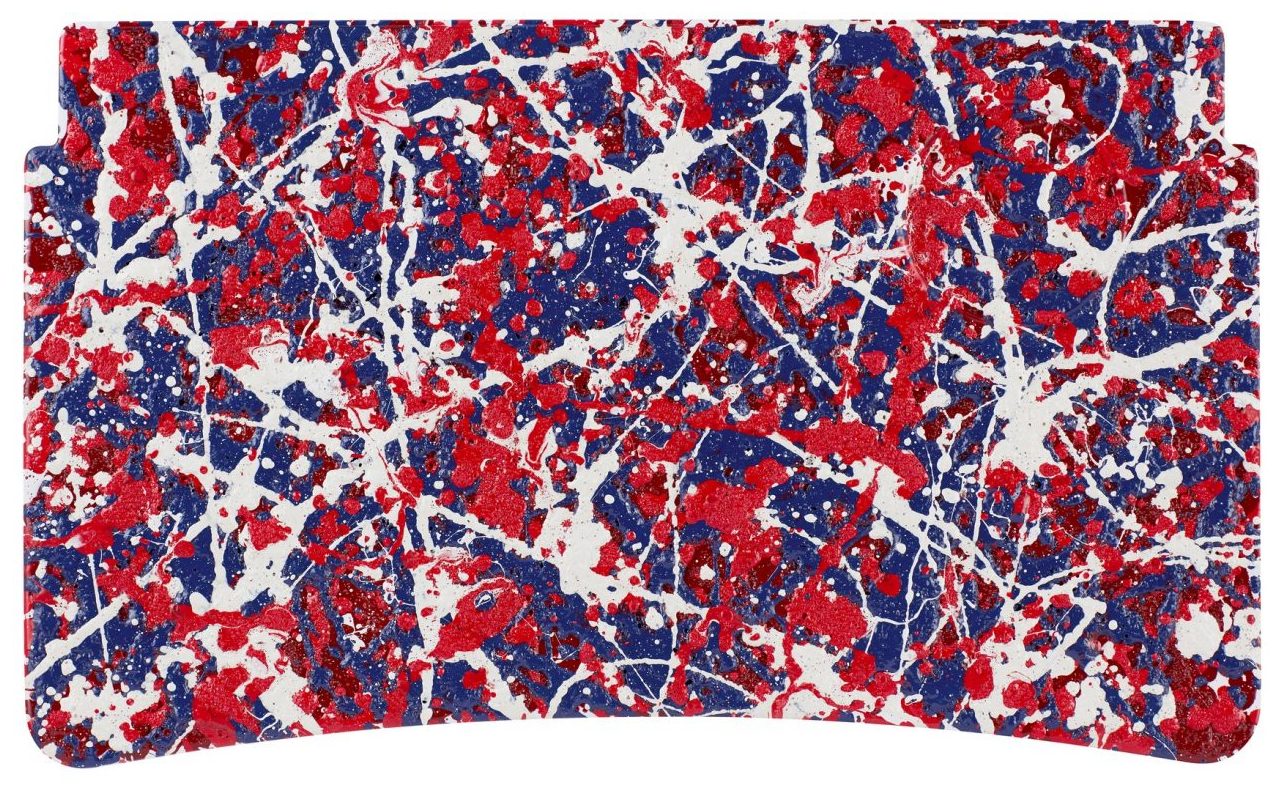 Noma Bar (LONDON)
As a London-based artist, Noma is inspired by the weather and how it affects the mood of the city. 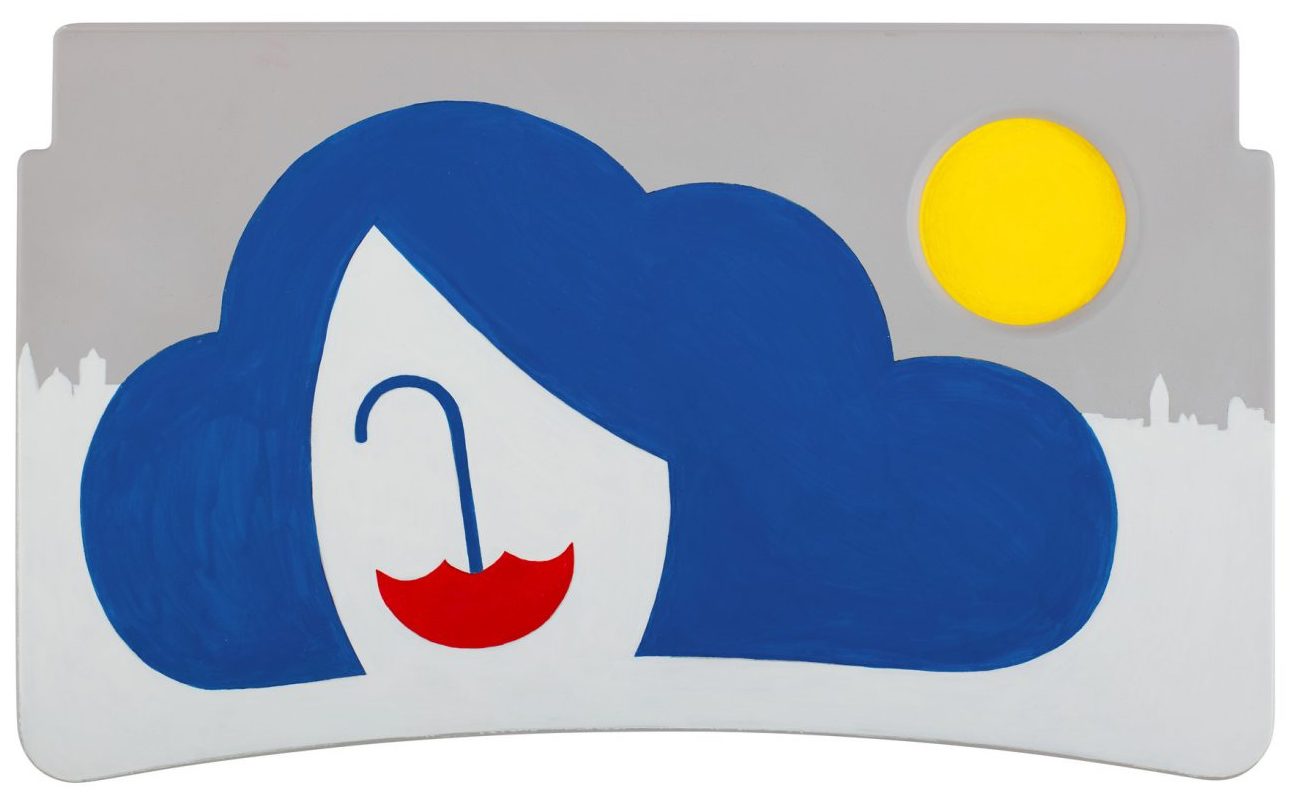 Stevie Gee (LOS ANGELES)
In Stevie’s Los Angeles, the stars of Hollywood Boulevard are playfully juxtaposed with the everyday people who walk on them. 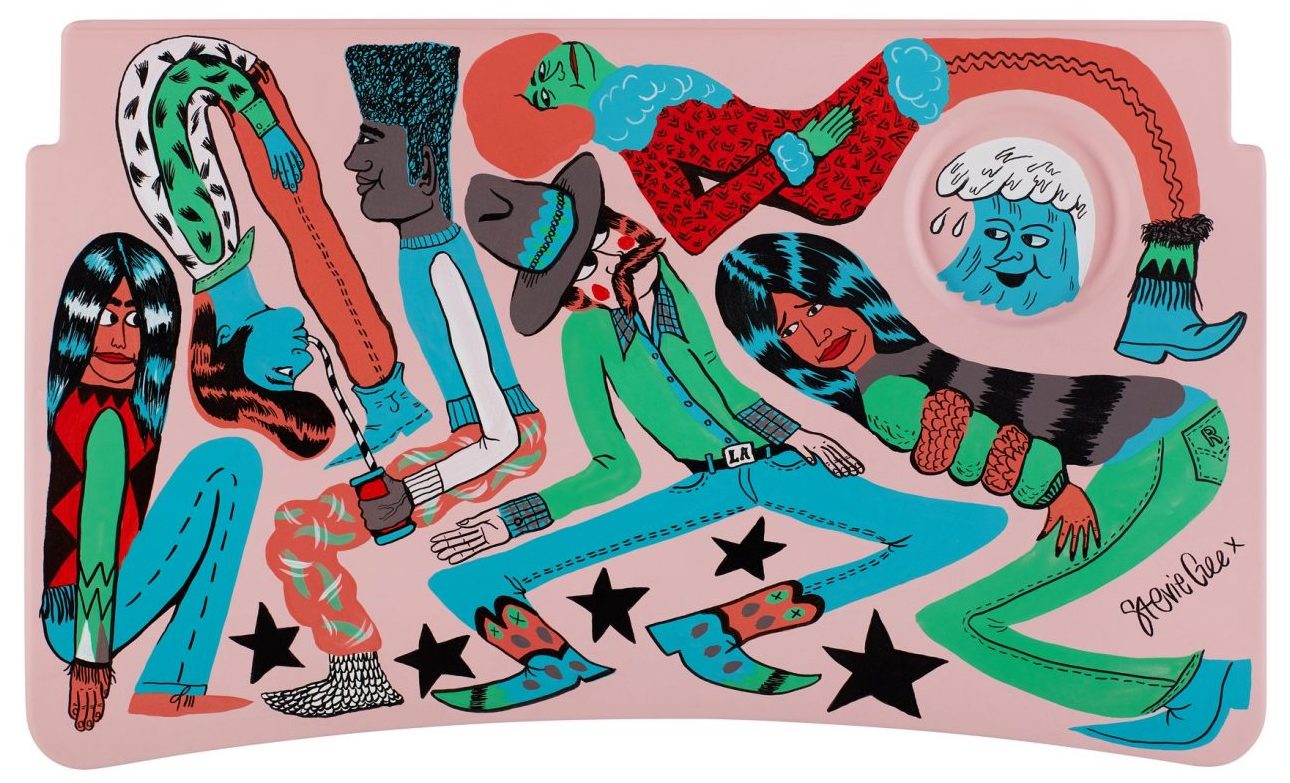 Skip Hursch (MEXICO CITY)
In Skip’s work, the vivid colors and motifs of Central American textile design get a modern twist and give us a taste of the vibrant Mexican capital. 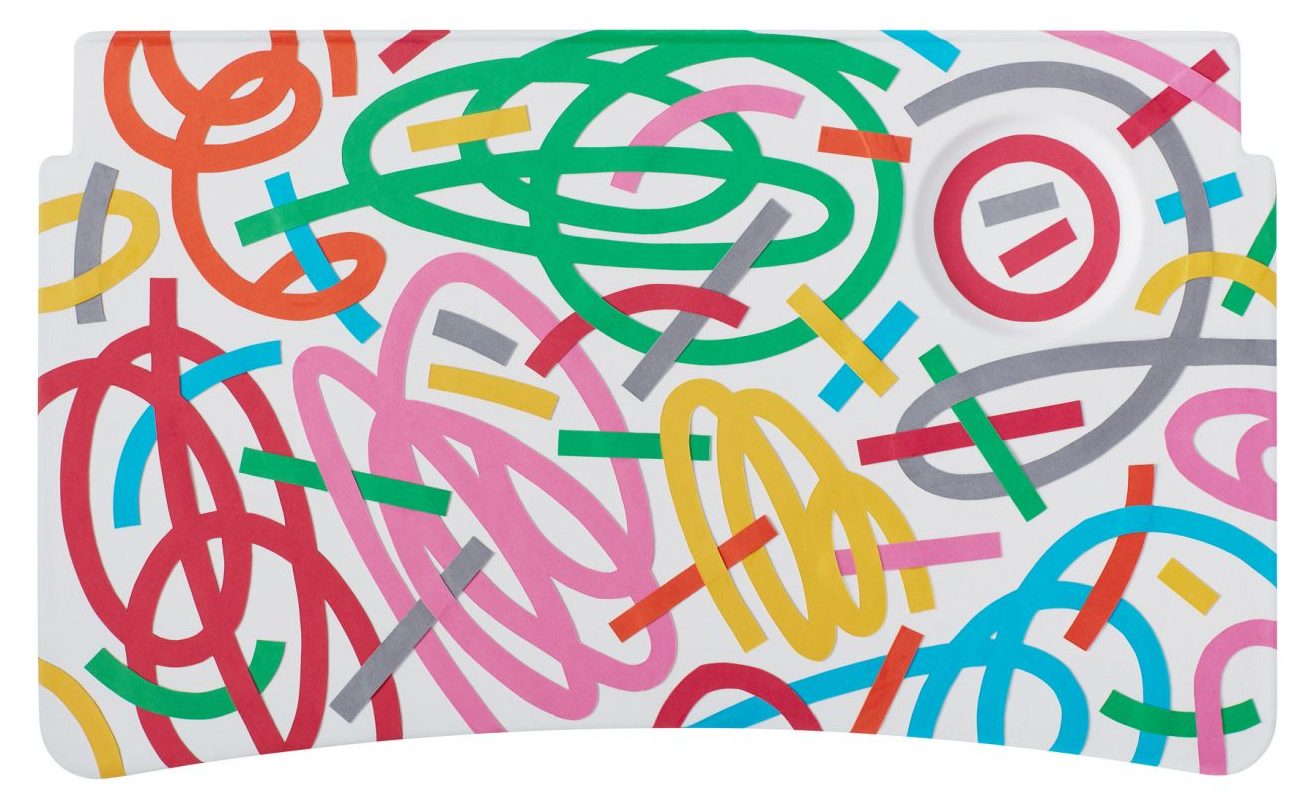 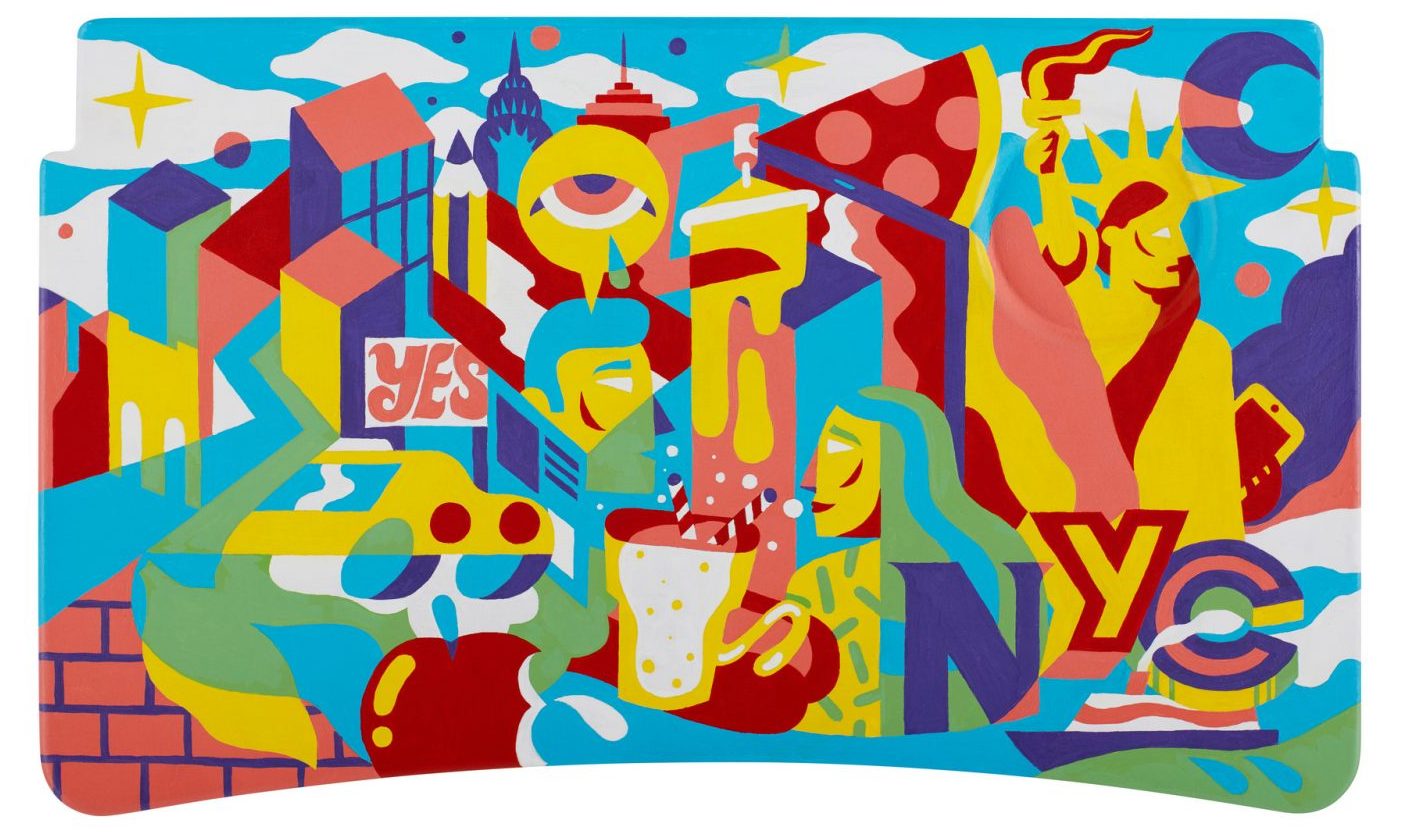 James R Eads (PARIS)
With its swirling, effervescent night sky, James’ portrait of Paris captures the magic of the city at night. 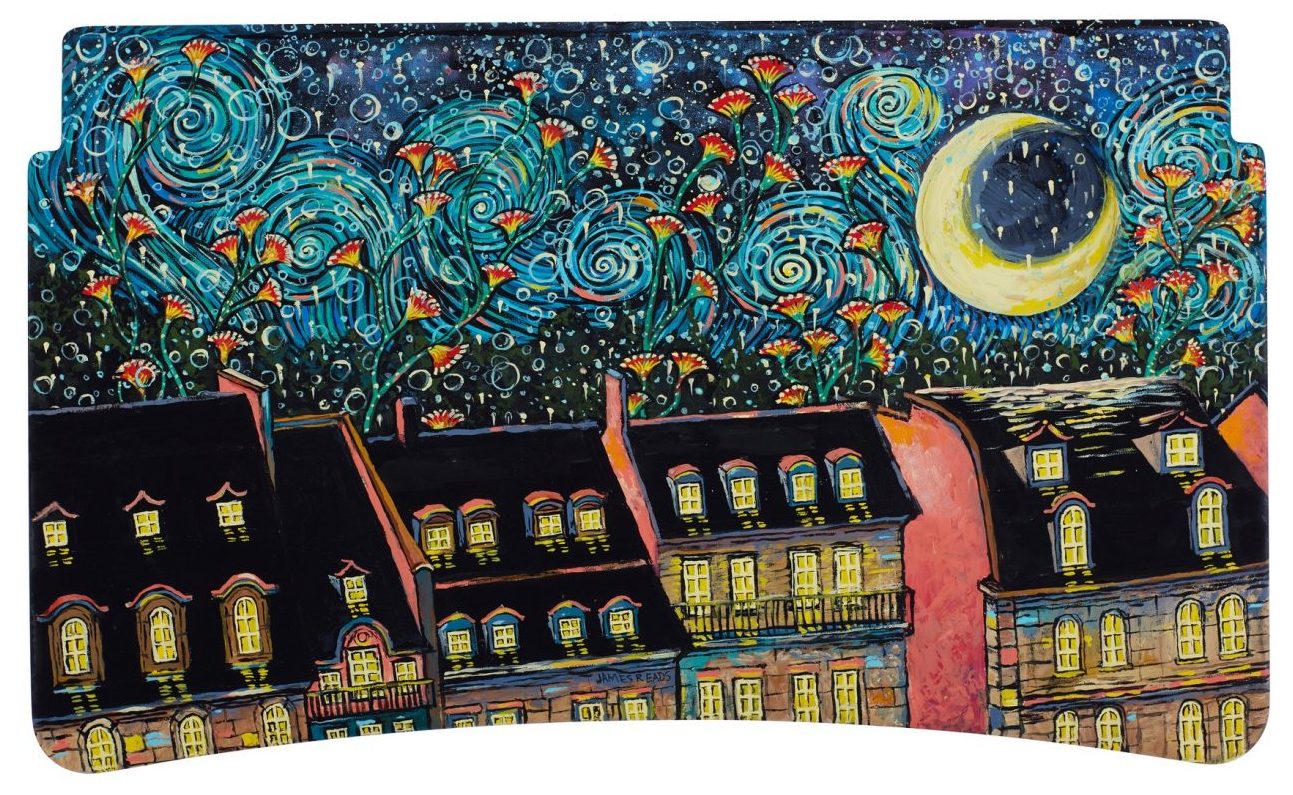 Alex Yanes (SAO PAULO)
Alex drew inspiration from the street art of Sao Paulo to create this portrait of a boy brimming with optimism as he flies high above the city. 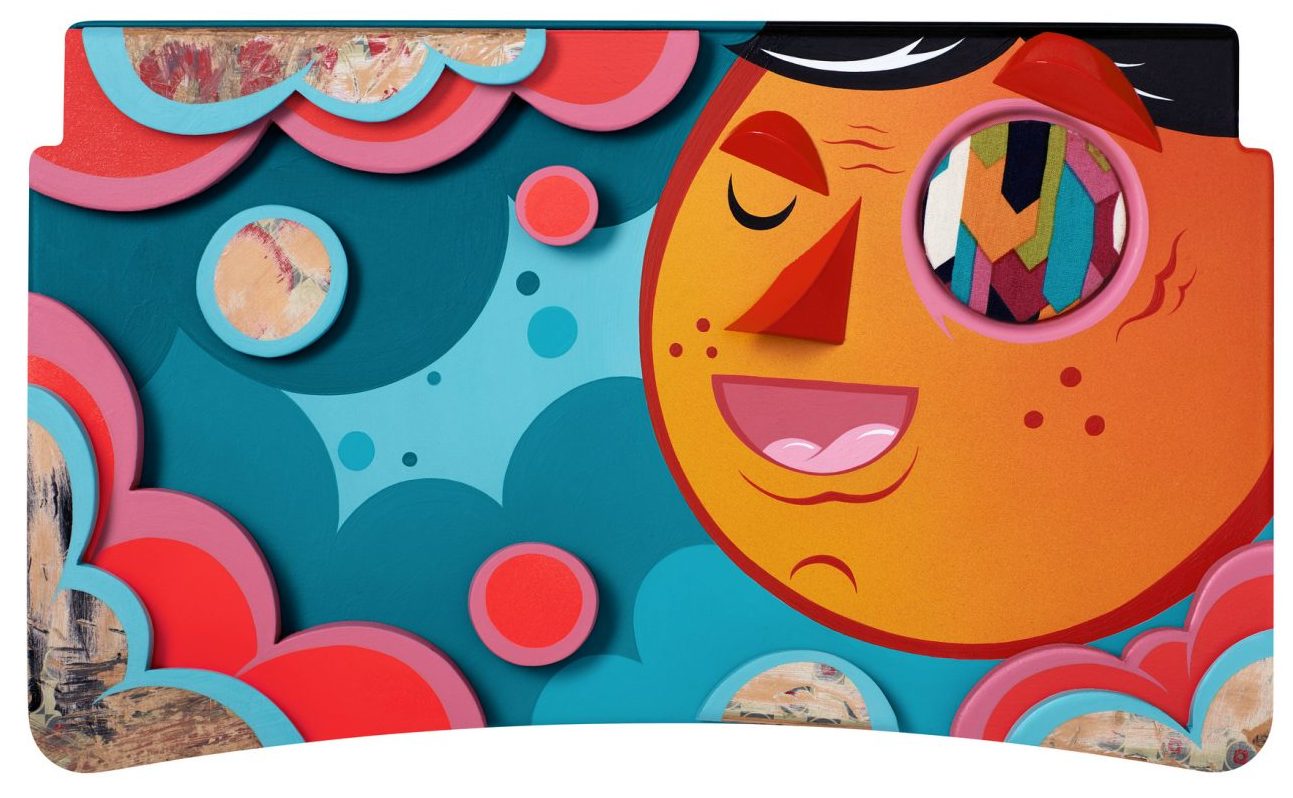 Will Bryant (SEATTLE)
In depicting Seattle, Will drew inspiration from the rivers, mountains and rain-misted evergreens that surround the city and lend it a refreshing, down-to-earth vibe. 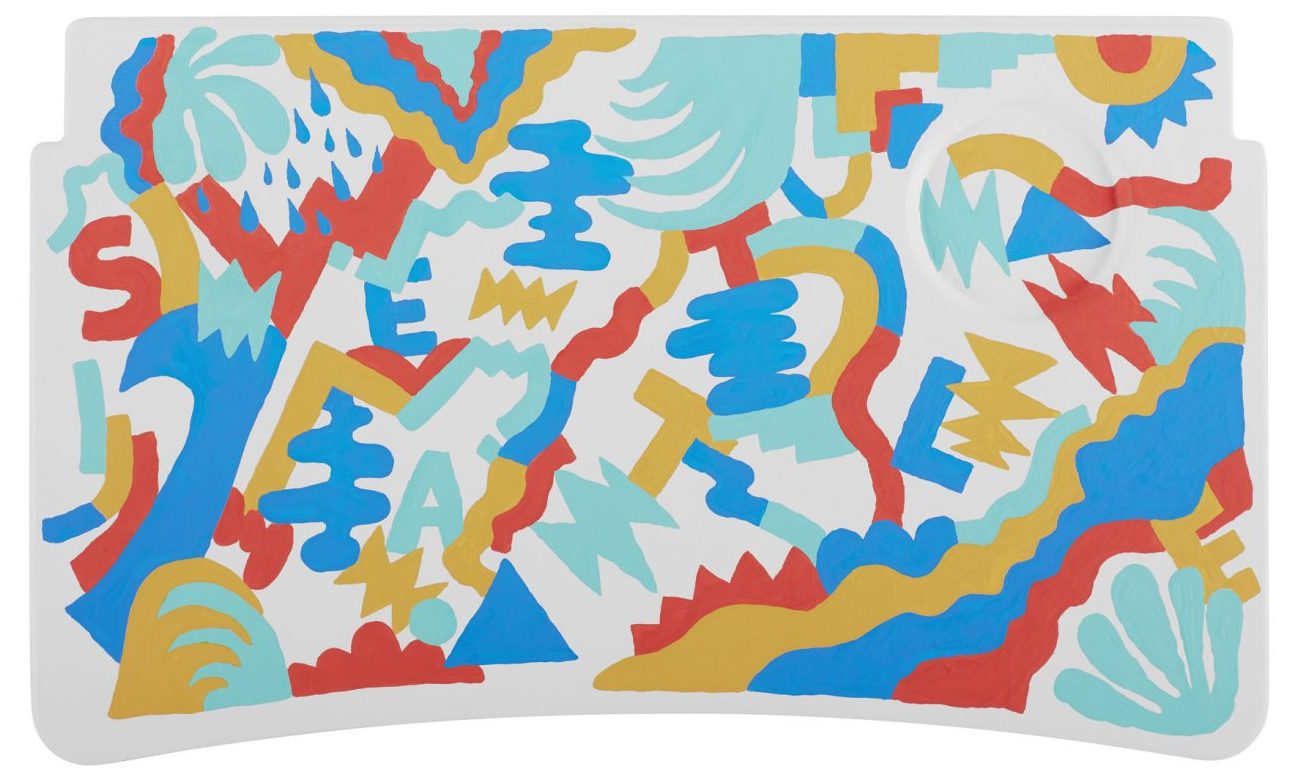 Yulia Brodskaya (SEOUL)
Although it may appear painted, Yulia’s portrait of Seoul is crafted entirely with paper. This unique style seamlessly captures the flavor of the city, its vibrant colors, and iconic cuisine. 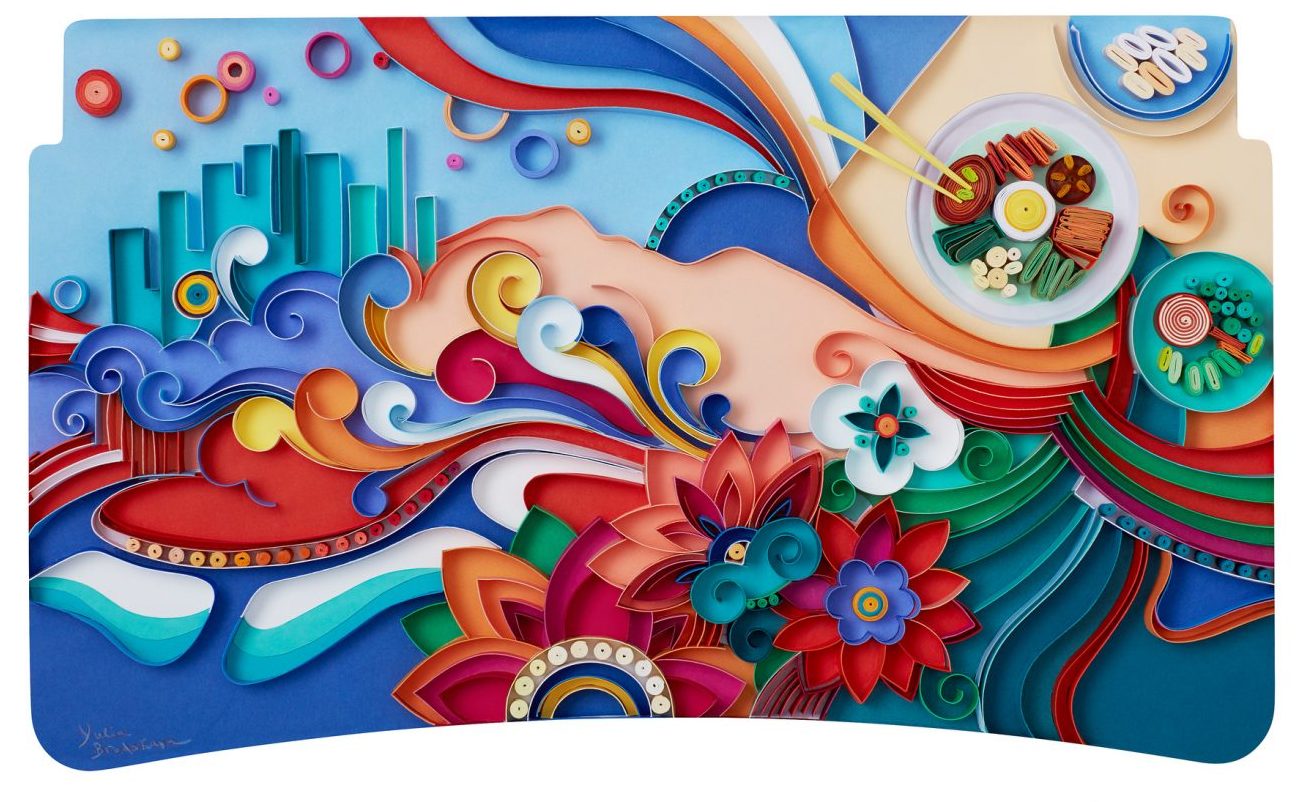 Ping Zhu (SHANGHAI)
In Ping’s work, we see Shanghai through the prism of the street market, the place where food, commerce and culture bubble over and tell the story of China’s past and present. 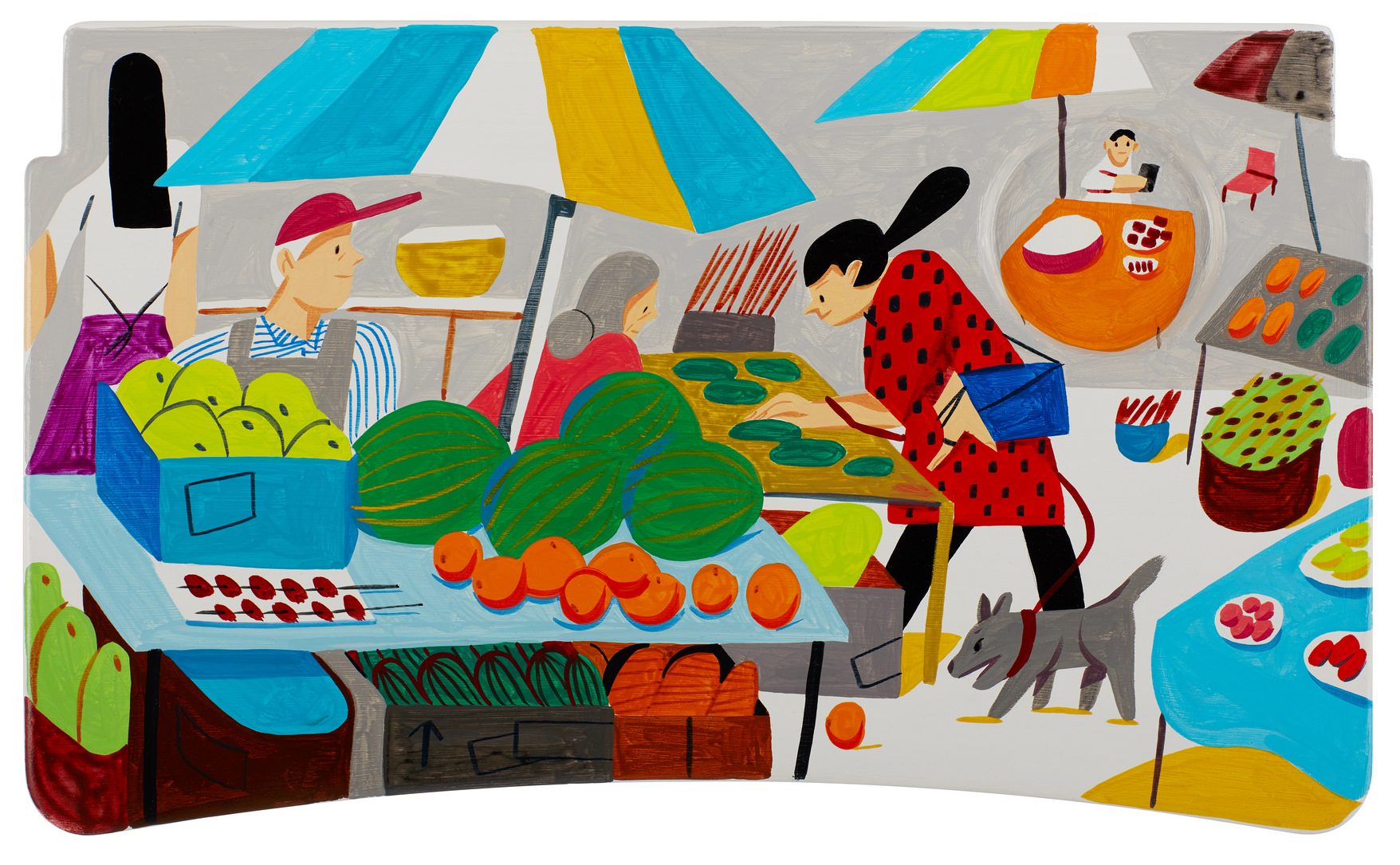 Paola Gracey (TOKYO)
The mesmerizing lights and neon signs of Tokyo take on a life of their own through Paola’s invigorating use of glitter, paint drips and epoxy resin. 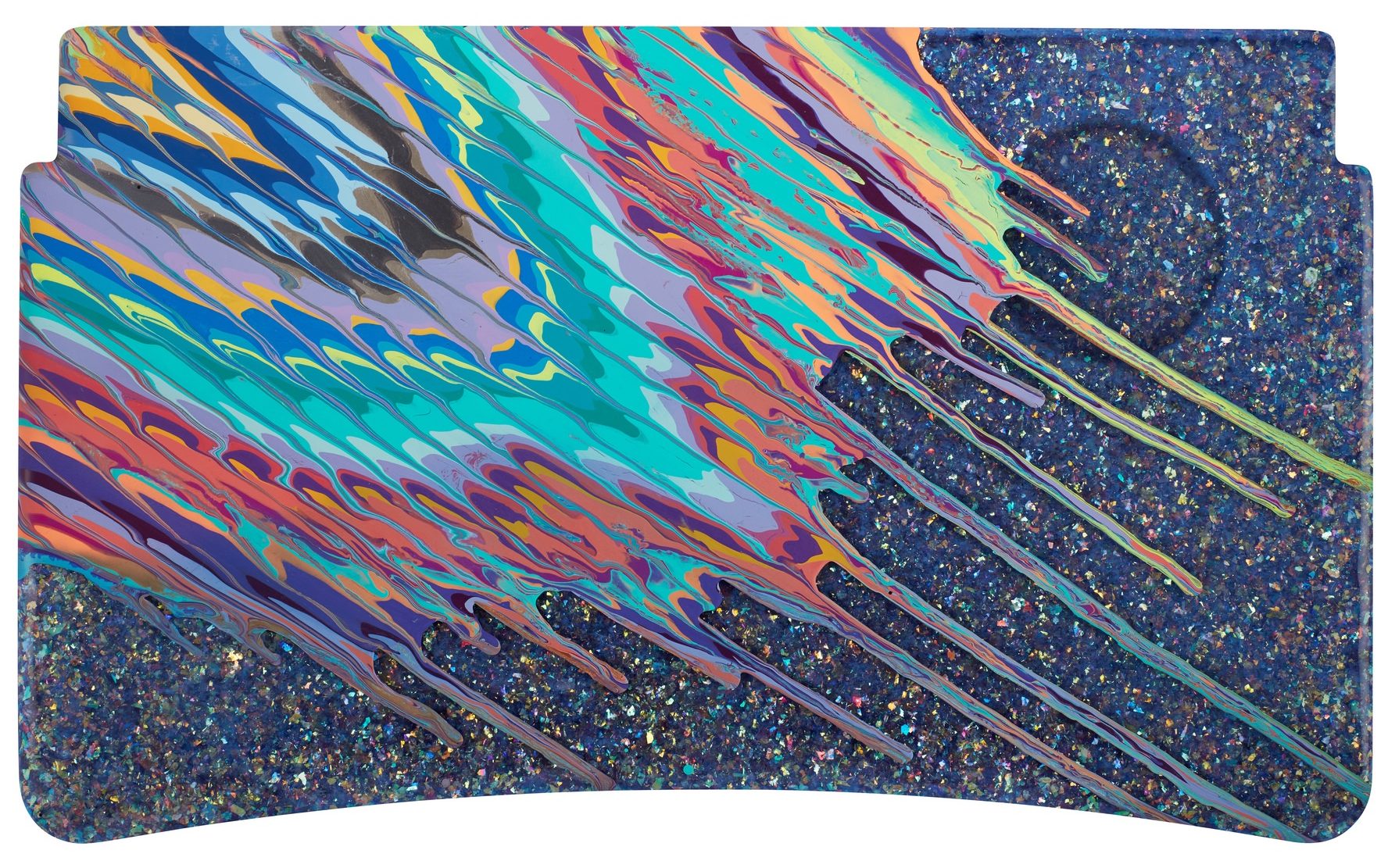