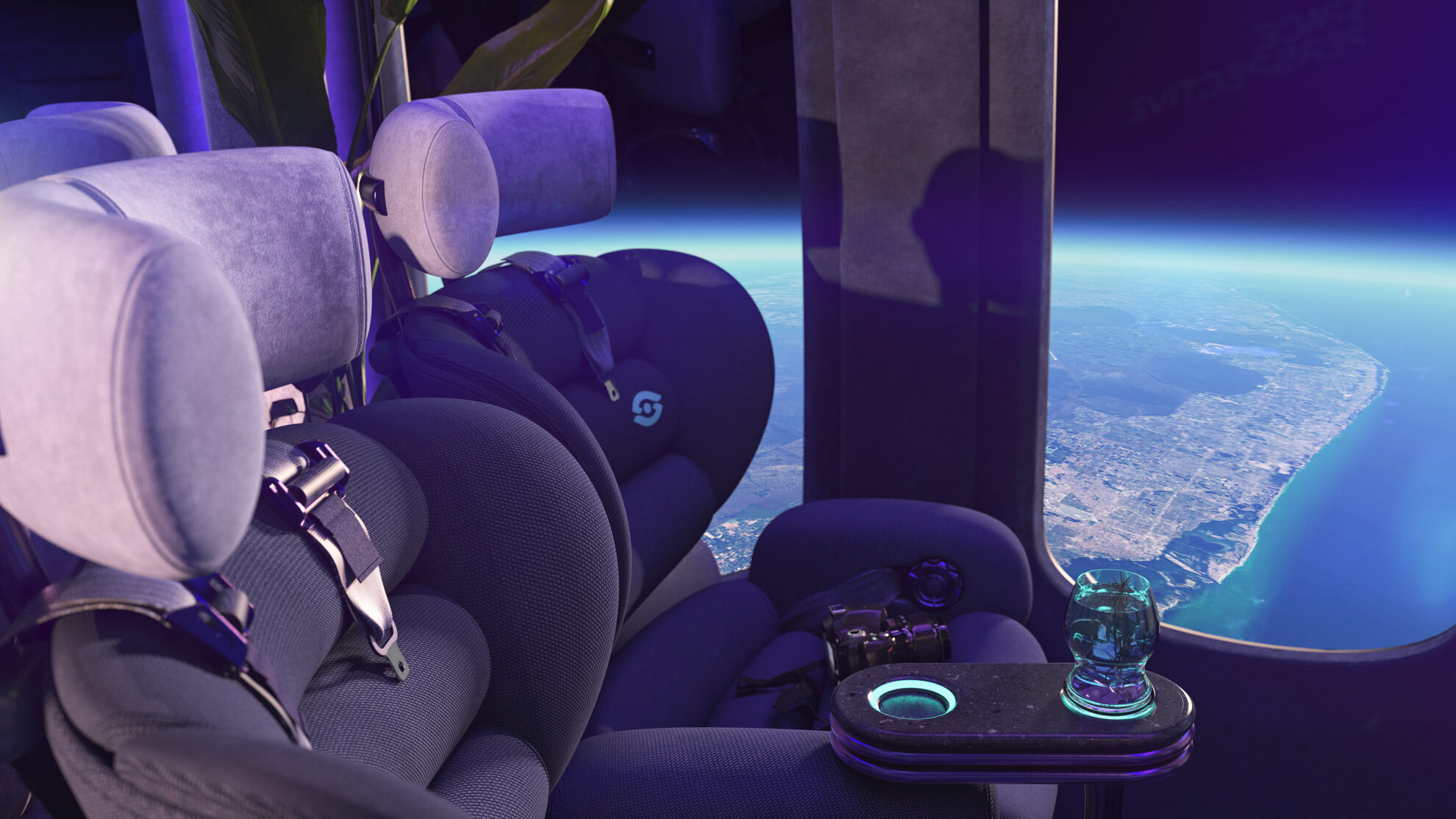 Space Perspective claims to have designed the ‘ultimate safe spaceflight’ experience onboard a spherical vessel attached to a balloon, which gently ascends to the stratosphere before coming back down over the course of six hours. Jenny Southan reports

With tickets costing US$125,000 per person, Space Perspective is developing a more affordable way to experience seeing Earth from above than shooting up on a rocket (tickets on Virgin Galactic cost US$450,000). It is doing so by spearheading stratospheric balloon flights, which travel at a much slower and gentler pace, and are more economical to operate.

Once at their apex, those on board are able to see 450 miles in every direction, providing a tranquil experience of the “Overview Effect”, a quasi-religious experience that astronauts report when looking down on the planet.

Space Perspective, which describes itself as the “world’s first luxury spaceflight experience company”, has now announced that its patent-pending Spaceship Neptune capsule is in production at the company’s state-of-the-art campus, near its Operations Centre at NASA’s Kennedy Space Centre, Florida. 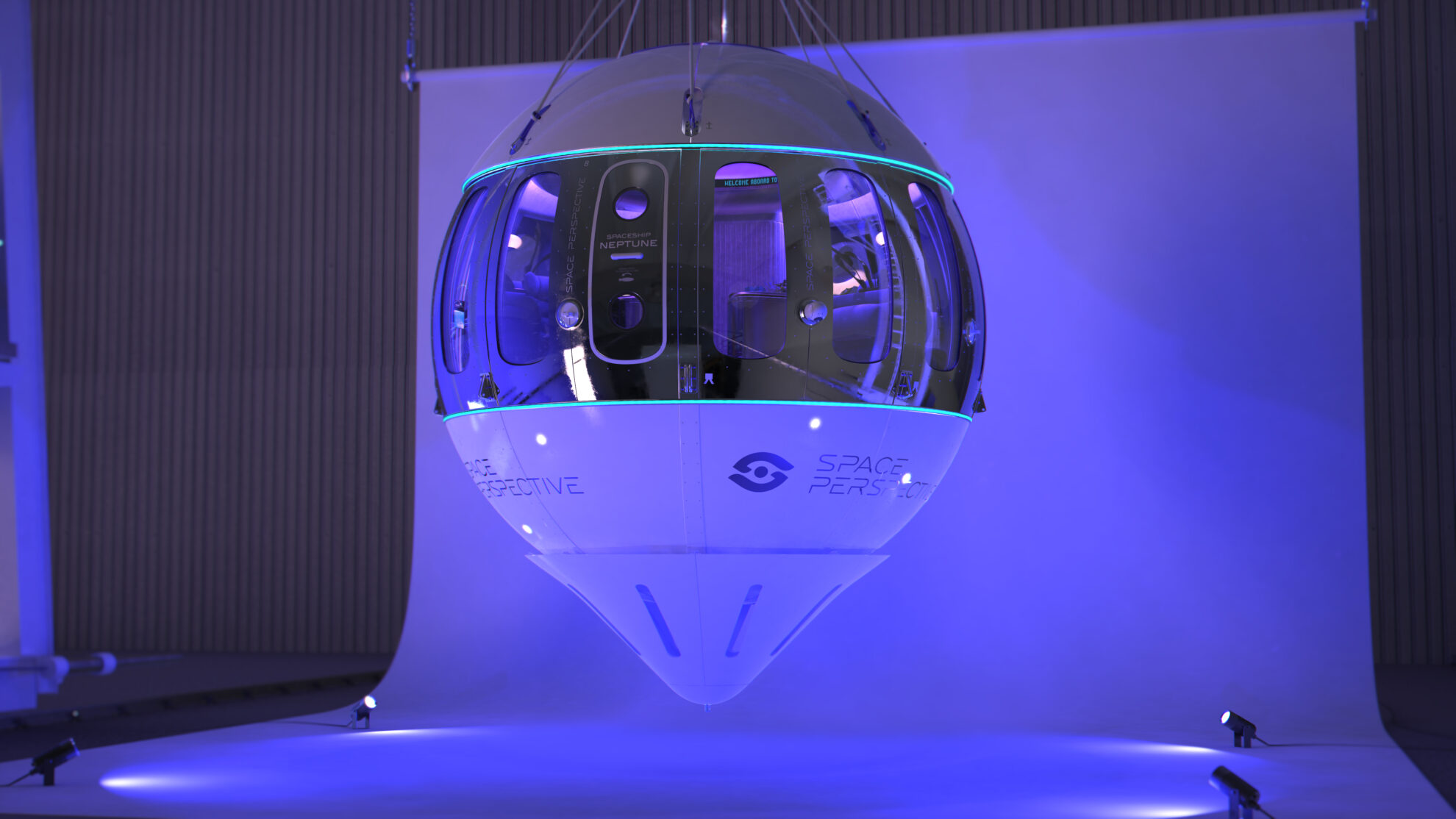 So far, the company has sold almost 900 tickets for its stratospheric balloon flights, as well as capsules for eight “popular, commercial flights”, which are targeted to begin in late 2024.

Space Perspective is currently taking reservations for 2025 and beyond. Seats can be secured with a fully refundable deposit of US$1,000 upwards, and customers can also book and pay online via crypto – a first in the commercial space flight industry. 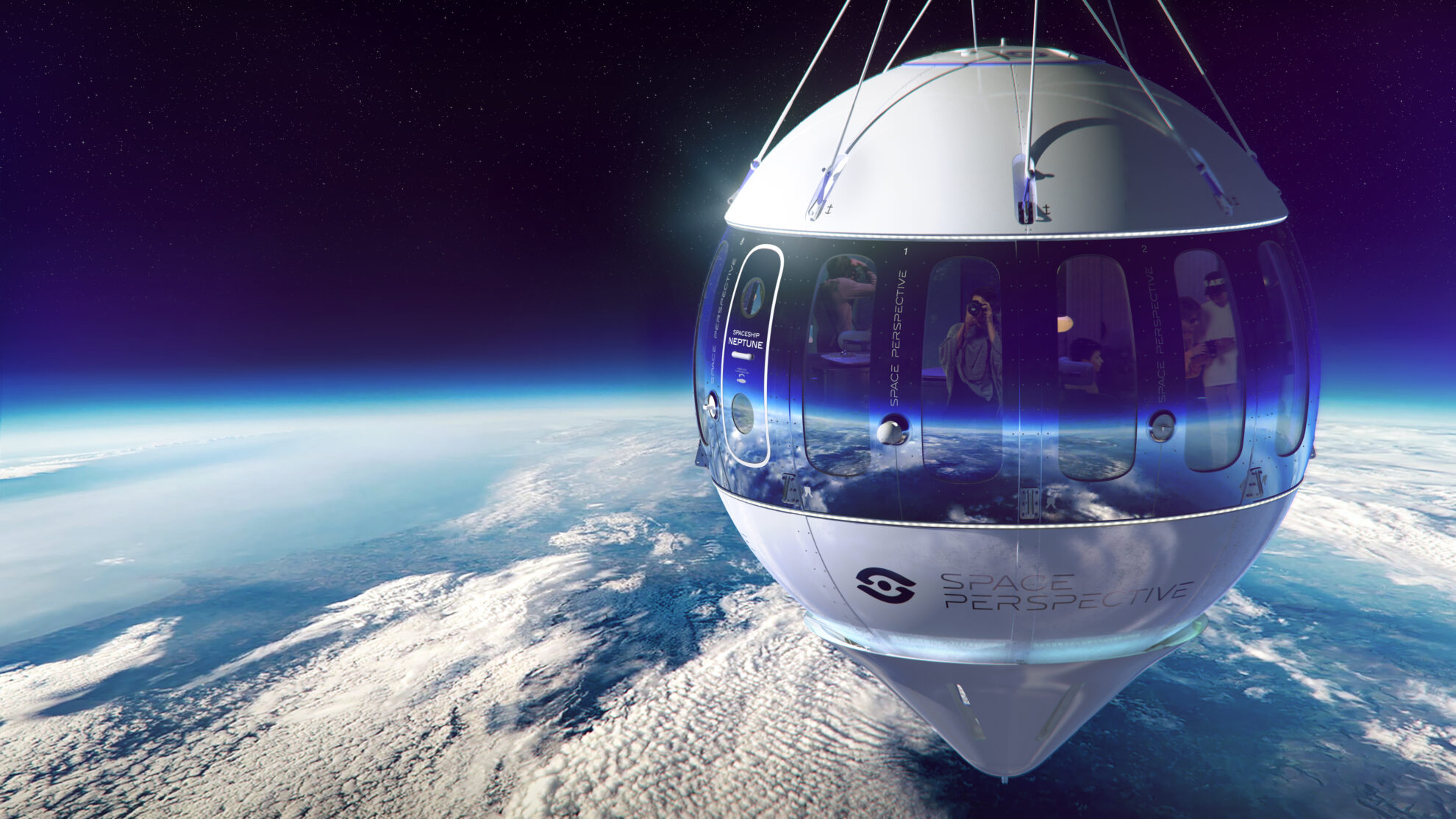 Designed to be carbon neutral, flights aboard Spaceship Neptune will see passengers accommodated in a climate-controlled, pressurised capsule, propelled by a patented SpaceBalloon.

The six-hour round trip will enable passengers to “soak in the beautiful views of the thin blue line circling earth below and the dark vastness of space above”.

Space Perspective says that the capsule’s “elegant spherical exterior maximises the 360-degree panoramic views via the largest-ever, patented windows to be taken to the edge of space”. 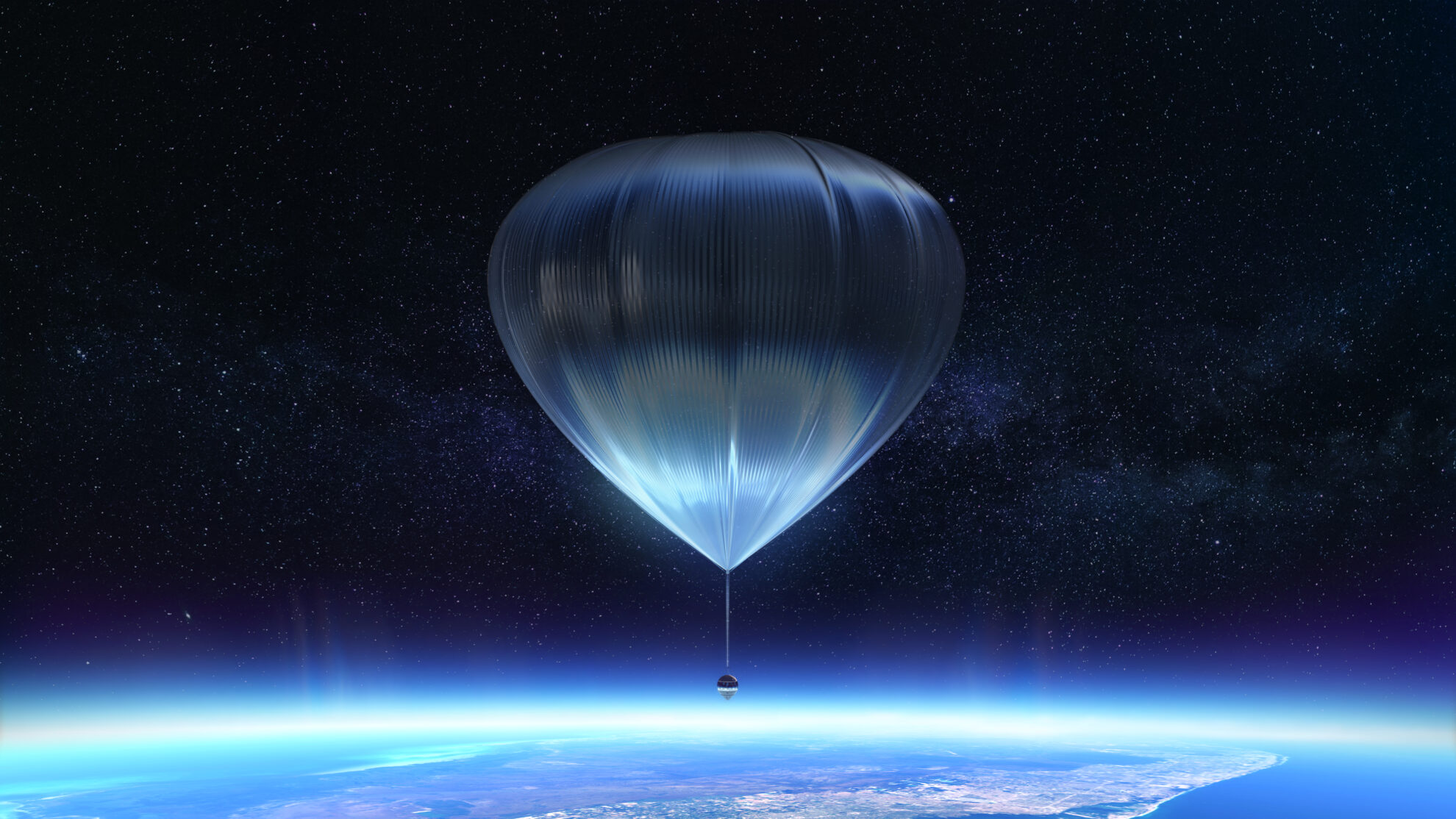 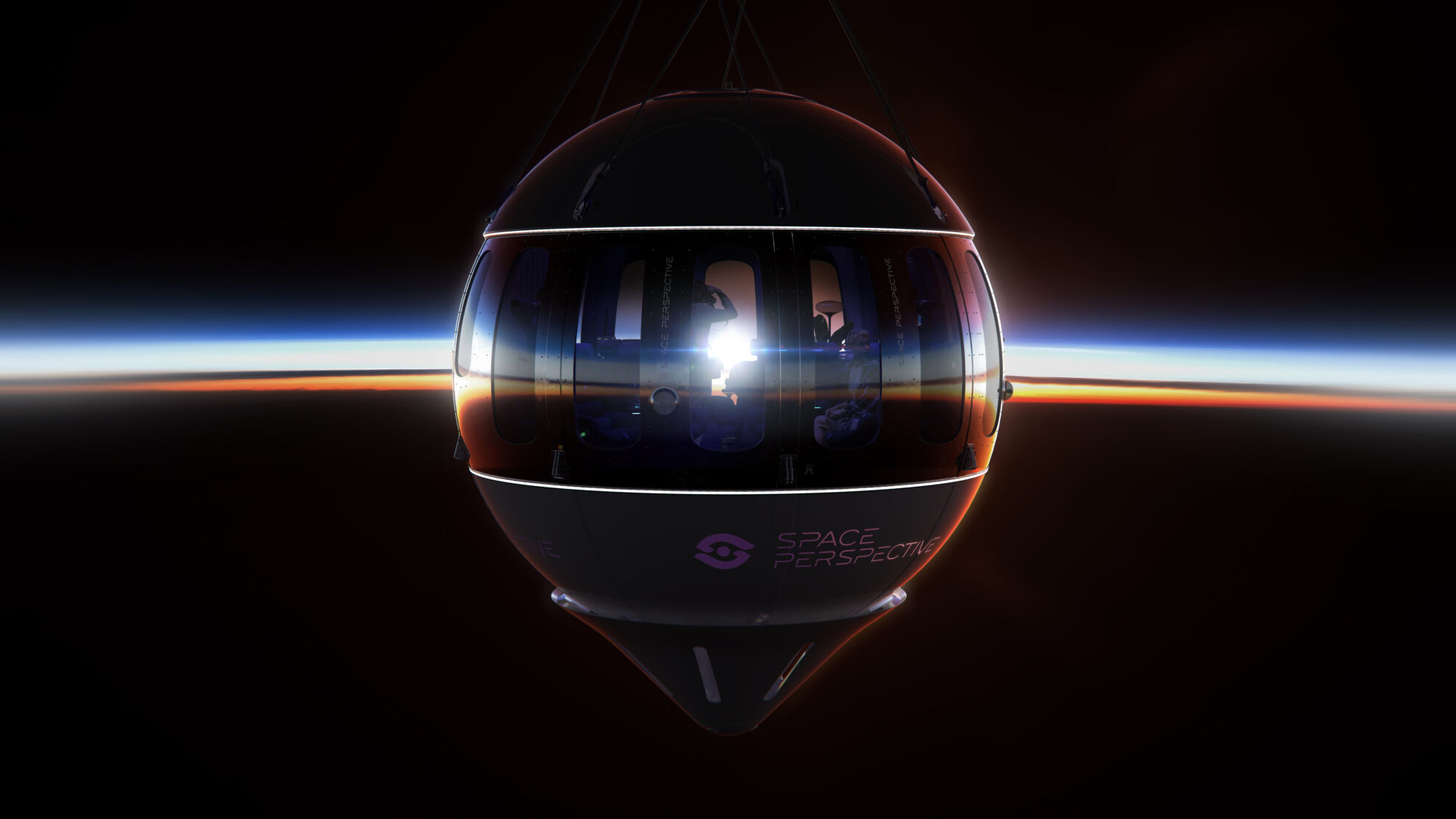 The windows will also have a reflective coating on them similar to an astronaut’s helmet, which will limit “solar gain” and keep the interior Space Lounge comfortable and cool. Inside, there have enough headroom for passengers to move around.

According to Space Perspective, the Spaceship Neptune capsule “seamlessly marries the singular demands of space travel in relation to pressure, temperature and structural engineering to the ultimate user experience”. 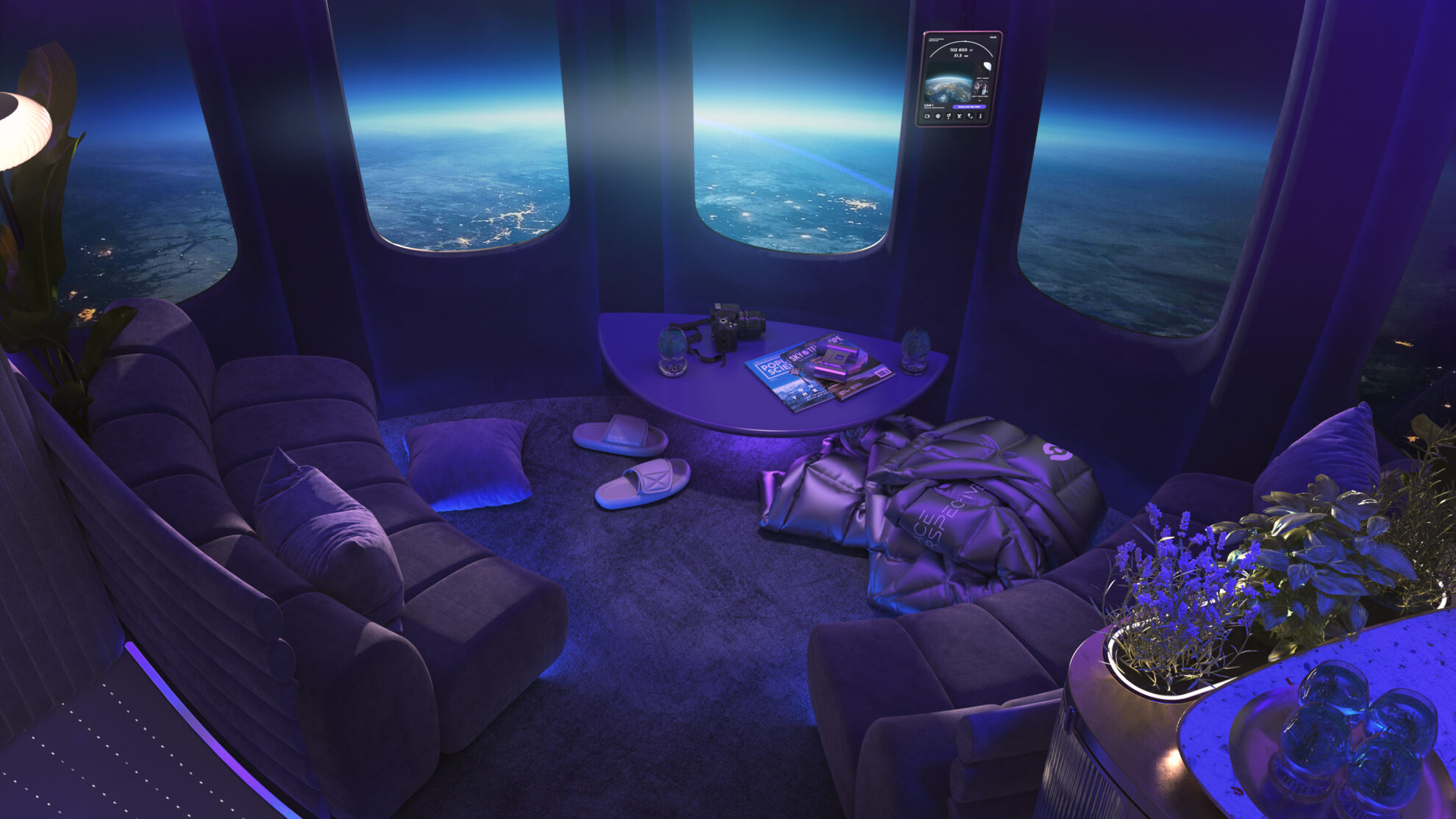 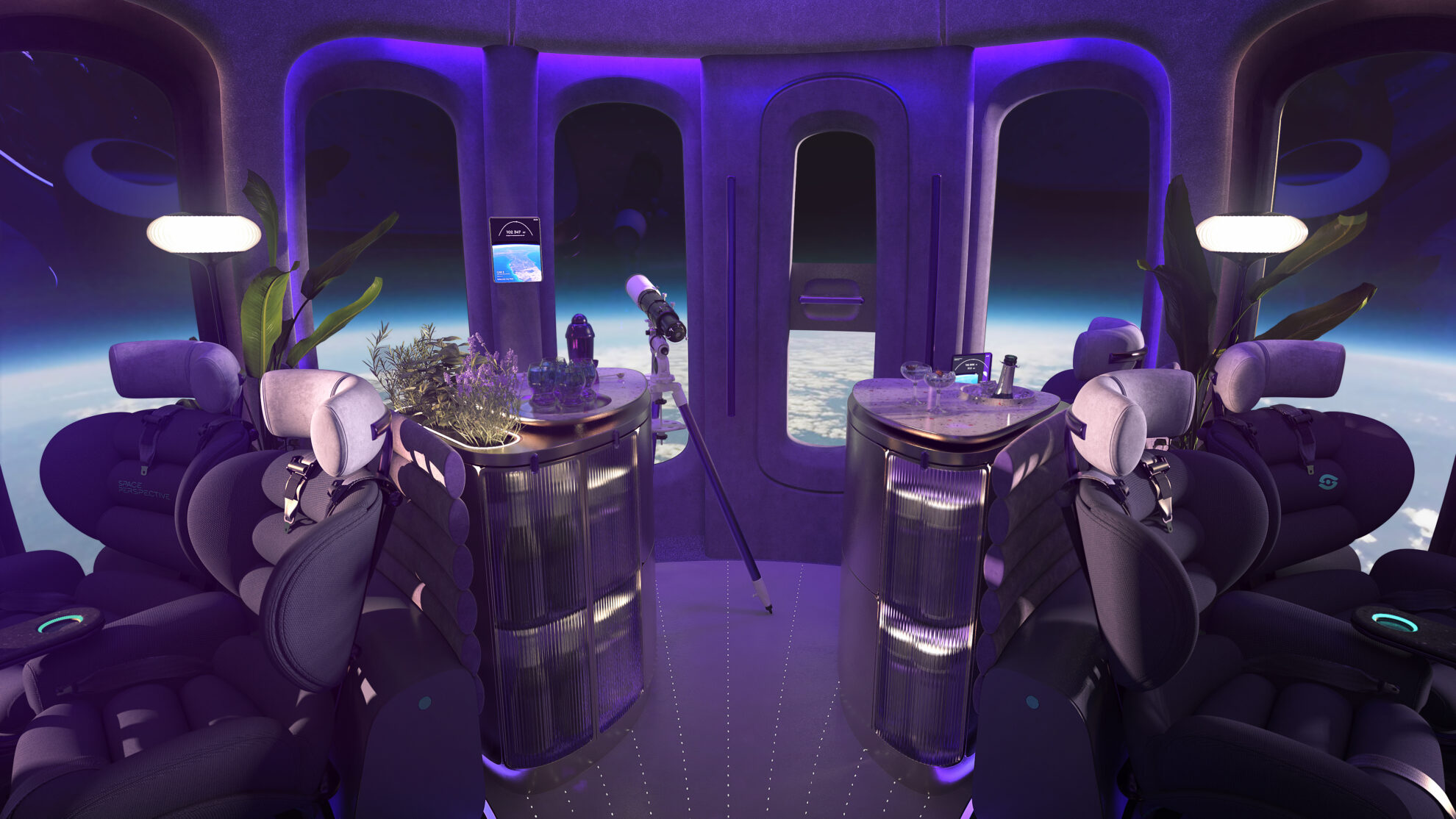 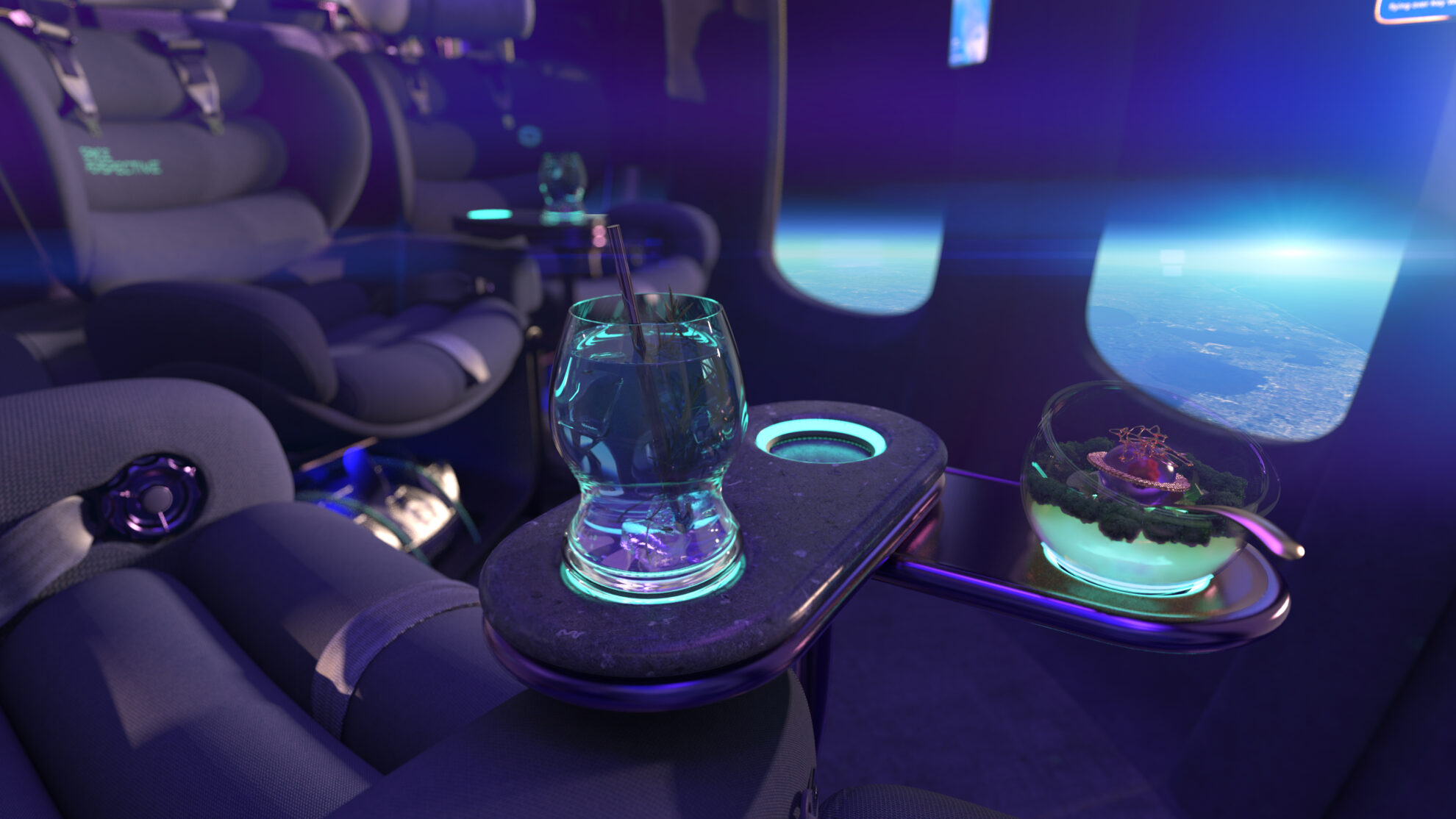 How will the capsule and balloon land? A “proprietary splash cone” ensures Spaceship Neptune’s ocean landing is “gentle and safe”. According to NASA, water landings are considered the “low risk” way of returning a capsule from space.

Following the gradual, two-hour descent to Earth and gentle “splash down” in the sea, a Space Perspective crew will retrieve passengers, the capsule and the SpaceBalloon by ship.

Taber MacCallum, founder, co-CEO and CTO of Space Perspective, says: “Centuries of balloon and parachute operation and development demonstrate that always flying with the balloon from launch through landing, with traditional parachutes as a reserve backup system, is by far the simplest, safest and most robust solution.

“Our proprietary flight system means that the capsule and SpaceBalloon always remain connected, and take-off and landing conditions are always within our control. The team has come together to create an amazingly robust, safe, and incredibly elegant and luxurious system for Spaceship Neptune. Simplicity and automation are the keys to safety.” 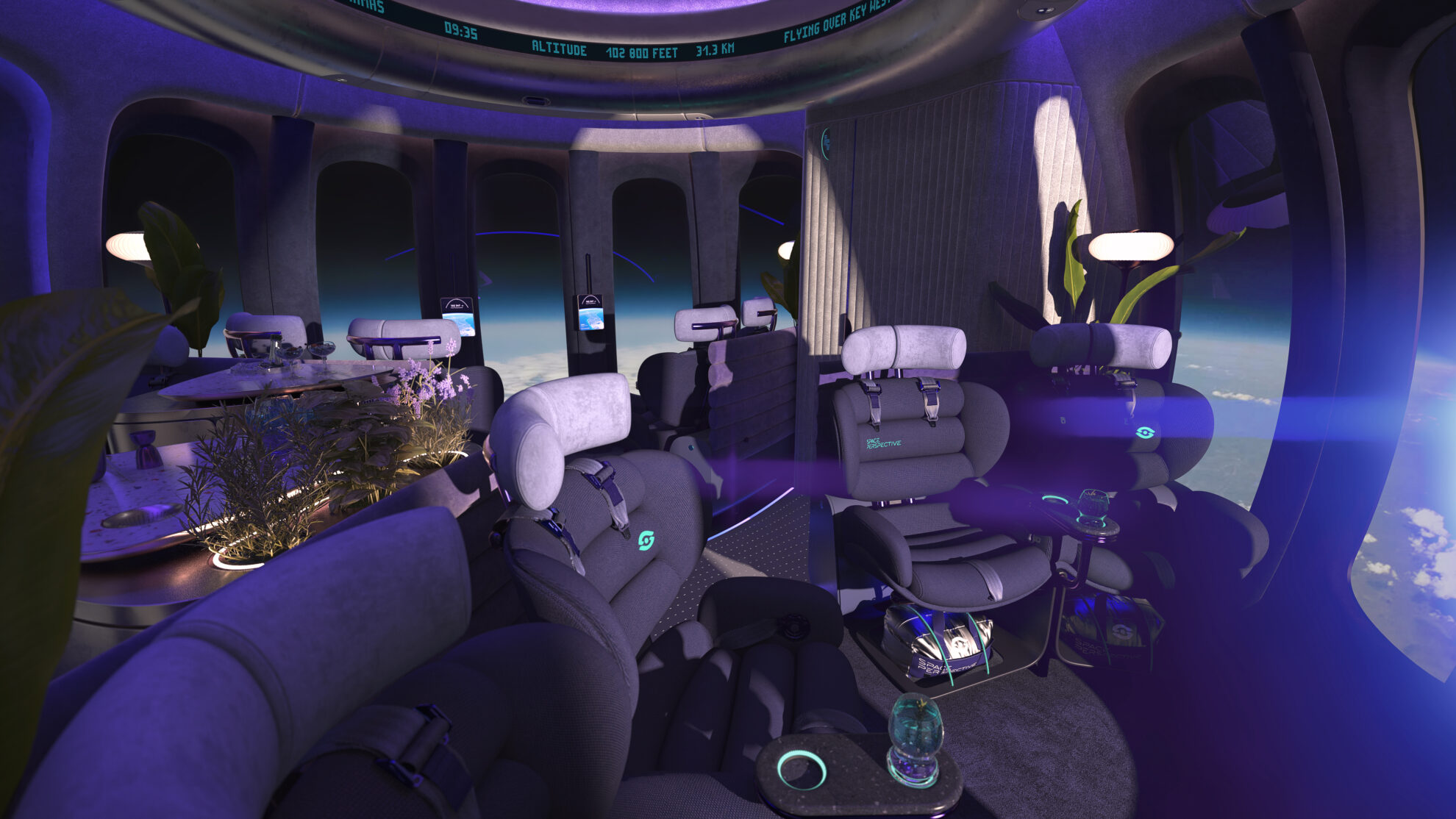 Meanwhile, Dan Window and Isabella Trani – founders of London-based design studio Of My Imagination, say: “Space travel presents a new realm of exciting challenges and creative thinking. As design specialists we have integrated the travel experience and aesthetic – from head room and groups of Explorers being able to move around comfortably within Spaceship Neptune from chair to restroom to bar – to, of course, maximising the once-in-a-lifetime views.

“The pioneering 360-degree windows will be accompanied by satellite imagery and 360-degree cameras to zoom in and out on the incredible vista. We now also have an exterior aesthetic that is every bit as powerful as the interior revealed in April – the engineering team have delivered an unsurpassable outcome in relation to performance and safety.

“As transportation designers, we are always looking to drive forward how and where we can take people next. Space travel is at the pinnacle of that, which is why we are excited to be working with Space Perspective to play a part in shaping this incredible experience.” 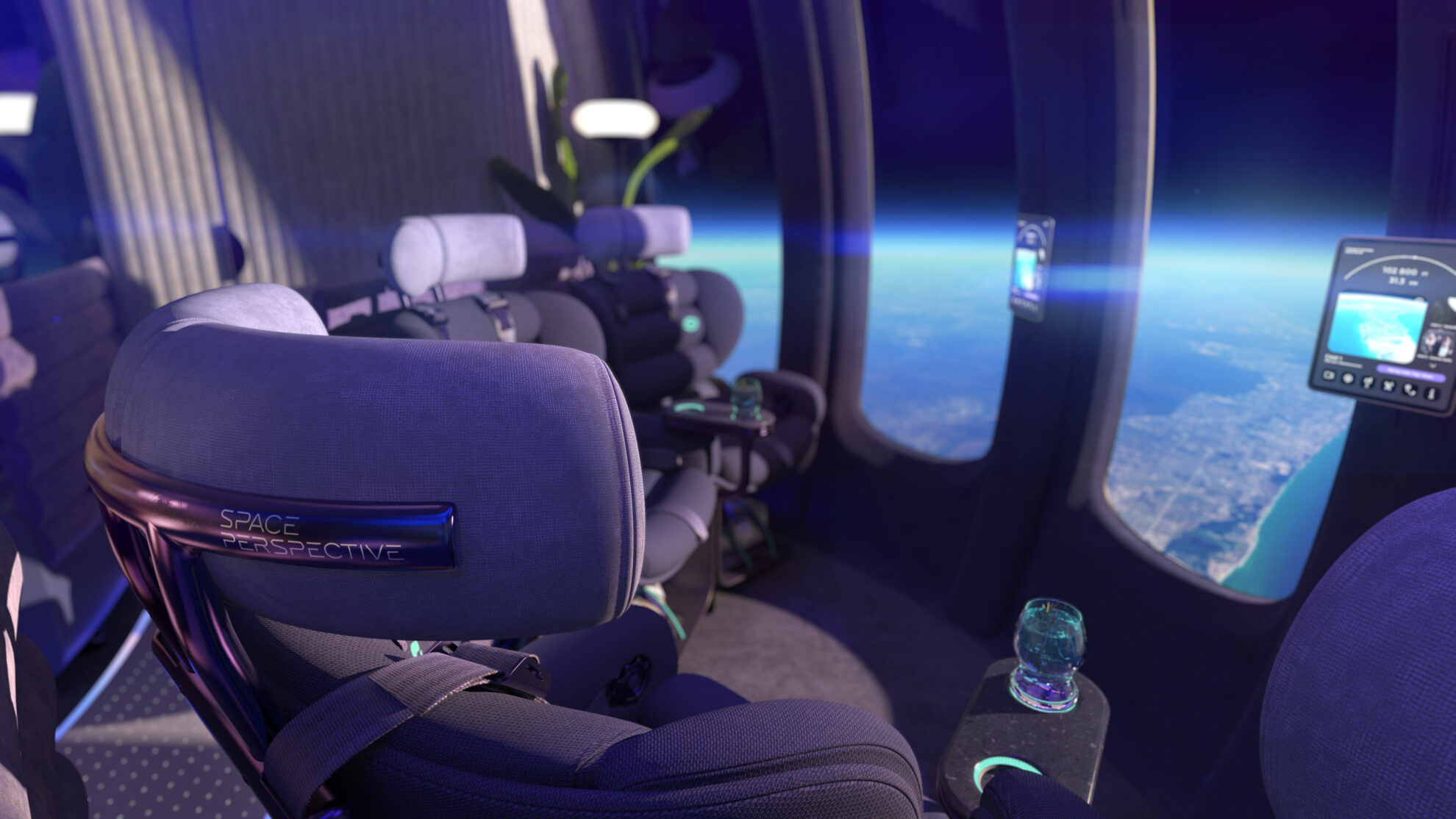 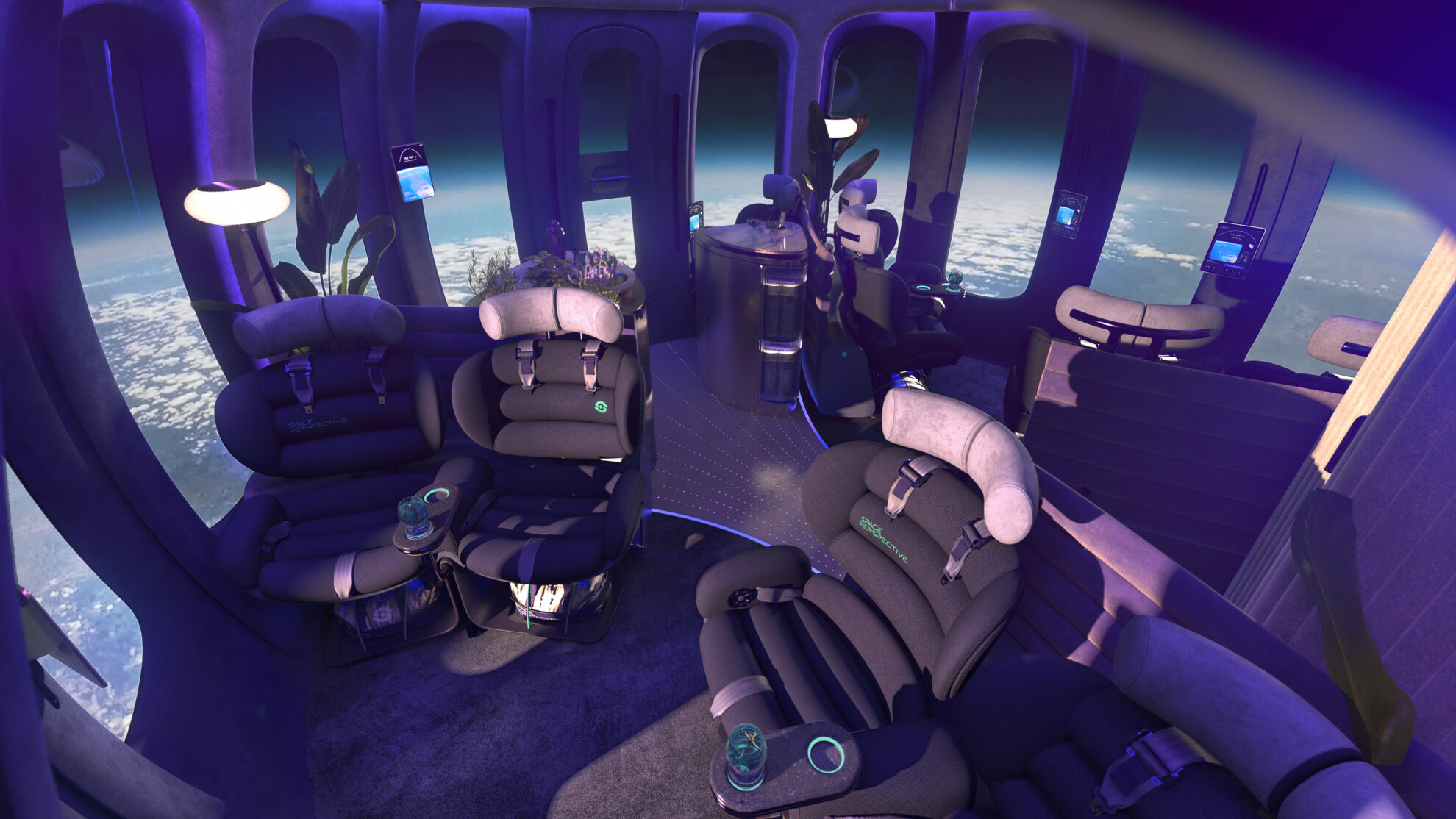 Space Perspective has also collaborated with Siemens on the project, which has provided expertise in rigorous and precise engineering to the design of Spaceship Neptune.

Cedrik Neike, member of the managing board of Siemens AG, and CEO of Siemens Digital Industries says: “The sky is no limit for digital transformation, and we are proud to play a part in helping Space Perspective get closer to their goal of lifting people into space in the safest and most stylish way possible.”