Described as a ‘revolution in civilisation’, Saudi Arabia is planning to build a futuristic metropolis called the Line, which will take the form of mirrored glass ‘earthscraper’ that stretches for miles across the desert. Jenny Southan reports

Up until now, there has been little update on Saudi Arabia’s proposed smart city Neom but now the country has revealed a sci-fi promotional video of the Red Sea enclave’s forthcoming centrepiece – the Line.

Looking like a shining glass wall, stretching 170km across the desert, the Line will take the form of two horizontal skyscrapers running parallel (Globetrender has dubbed it an “earthscraper”), inside of which will be homes for nine million residents.

However, its slender dimensions means it will occupy a footprint of just 34 sqkm, meaning it removes the problem of urban sprawl. Instead, it will spearhead a new concept of “zero gravity urbanism”.

Inside will be forests, a marina, parks, schools, offices, a high-speed rail line, a sports stadium and vertical gardens where fruit and vegetables are harvested by robots. Residents will pay a subscription fee to have three meals a day.

Although the country’s reputation has been mired by controversy associated with its poor human rights record, Saudi Arabia’s de facto ruler Crown Prince Mohammed bin Salman is working hard to diversify the Gulf state’s oil-dependent economy and catalyse innovation, at all cost. 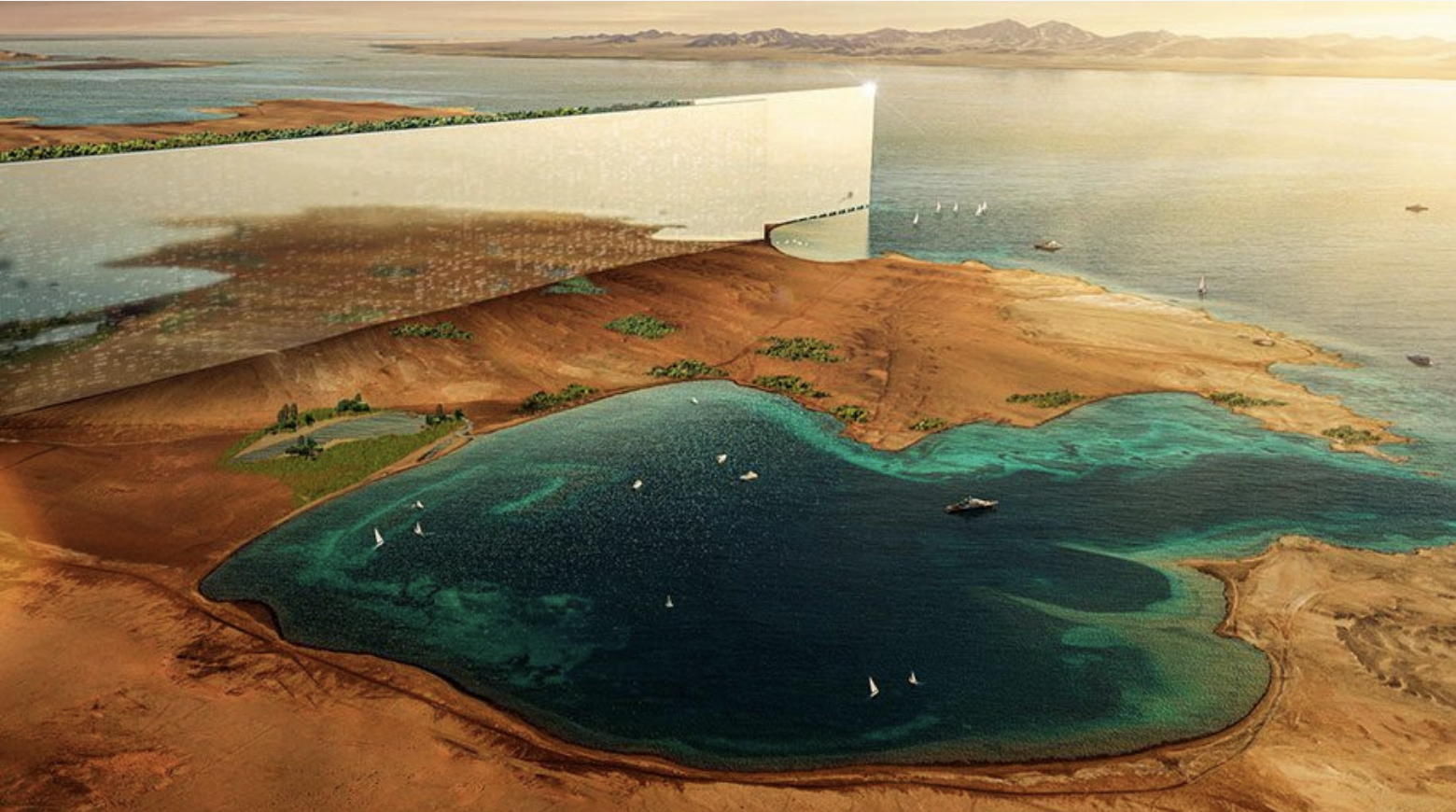 A promotional video for the Line says: “Imagine a traditional city and consolidating its footprint, designing to protect and enhance nature. We are building it to provide a more sustainable, healthier quality of life.

“The Line is designed as a series of unique communities providing equitable views and immediate access to the surrounding nature at the heart of the globe’s key trade routes. A place for commerce and communities to thrive. The Line – the city that delivers new wonders for the world.”

It goes on to say: “The Line’s communities are organised in three dimensions. Residents have access to all their daily needs within five-minute walk neighbourhoods. And the Line’s infrastructure means they will be able to travel end-to-end in 20 minutes, with no need for cars resulting in zero carbon emissions.”

The structure will be 500 metres tall – taller than the Empire State building – but the top will be open to the air. The video states: “By leveraging AI technology, services are autonomous. Intelligent solutions create efficiency and a year-round temperate micro climate with natural ventilation. Energy and water supplies are 100 per cent renewable.”

Undoubtedly the most extraordinary proposal for a building on Earth, the Line is being described as the planet’s most livable city “by far”. The Telegraph says it would be so long that it would even “have to ‘bend to the curvature of the Earth”. But with little progress to report on Neom since its intial announcement in 2017, will the Line remain a work of fiction?

The Guardian reports that Neom says it wants to create 380,000 jobs by the end of the decade “while providing the ultimate work-life balance”. Adding that although the city will operate “under its own founding law, which is still being prepared, Saudi officials say they have no plans to waive the kingdom’s alcohol ban”.

Prince Mohammed says that phase one of the project, lasting until 2030, would cost 1.2 trillion Saudi riyals (about £265 billion) – quite a large portion of his US$620 billion (£516 billion) sovereign wealth fund. Ultimately, the Line could take 50 years to complete.

He said in a recent statement: “At the Line’s launch last year, we committed to a civilizational revolution that puts humans first based on a radical change in urban planning.

“The designs revealed today for the city’s vertically layered communities will challenge the traditional flat, horizontal cities and create a model for nature preservation and enhanced human livability. The Line will tackle the challenges facing humanity in urban life today and will shine a light on alternative ways to live.

“We cannot ignore the livability and environmental crises facing our world’s cities, and Neom is at the forefront of delivering new and imaginative solutions to address these issues. Neom is leading a team of the brightest minds in architecture, engineering and construction to make the idea of building upwards a reality.

“Neom will be a place for all people from across the globe to make their mark on the world in creative and innovative ways. Neom remains one of the most important projects of Saudi Vision 2030, and our commitment to delivering the Line on behalf of the nation remains resolute.”