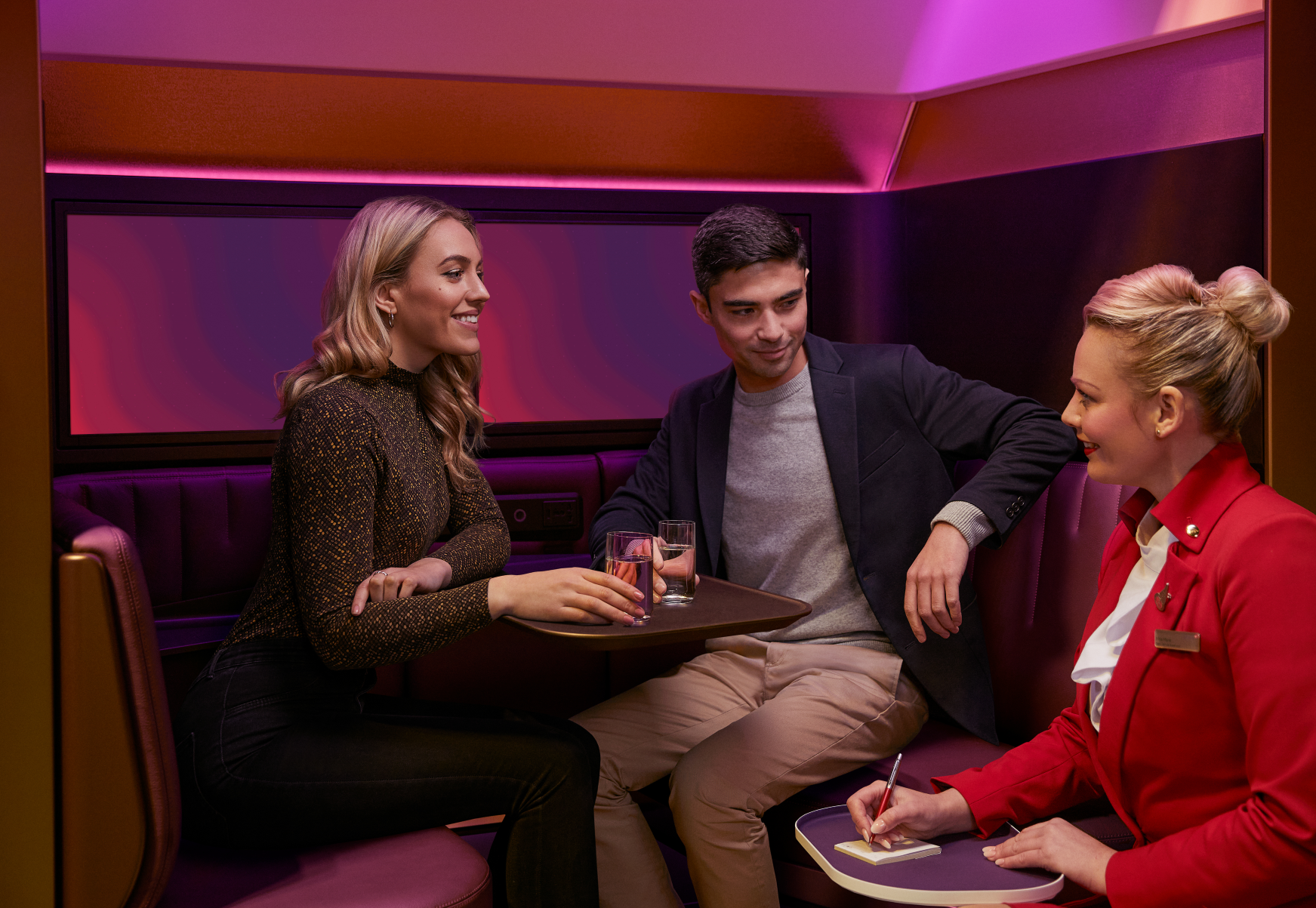 The Booth: Virgin Atlantic designs social space on A350

Virgin Atlantic has unveiled a new social space called the Booth on its A350-1000, designed for holidaymakers flying to leisure destinations such as Orlando. Jenny Southan reports

Virgin Atlantic has revealed a new interior and cabin configuration for its A350-1000 operating its leisure services, including a new social space called the Booth – but it’s only for Upper Class customers. And there is only room for two people.

The first route the A350-1000 will fly is London Heathrow to Orlando in December 2021. Onboard will be 397 seats available across three cabins (16 Upper Class suites, 56 premium economy seats and 325 in economy).

Within the economy cabin, 45 seats will be “Economy Delight”, offering customers extra legroom, as well as priority boarding and advanced seat selection.

Virgin Atlantic’s existing fleet of seven A350s are configured with just 335 seats – 44 in Upper Class, 56 in Premium and 235 in economy. Because there are fewer Upper Class seats (which take up a lot more space) on the new A350-1000, the airline can install more in premium economy and economy.

The styling and finishes, which include leather seats and almond gold highlights, are designed to be in tune with the airline’s award-winning Loft space featured across the mainline the A350 fleet. 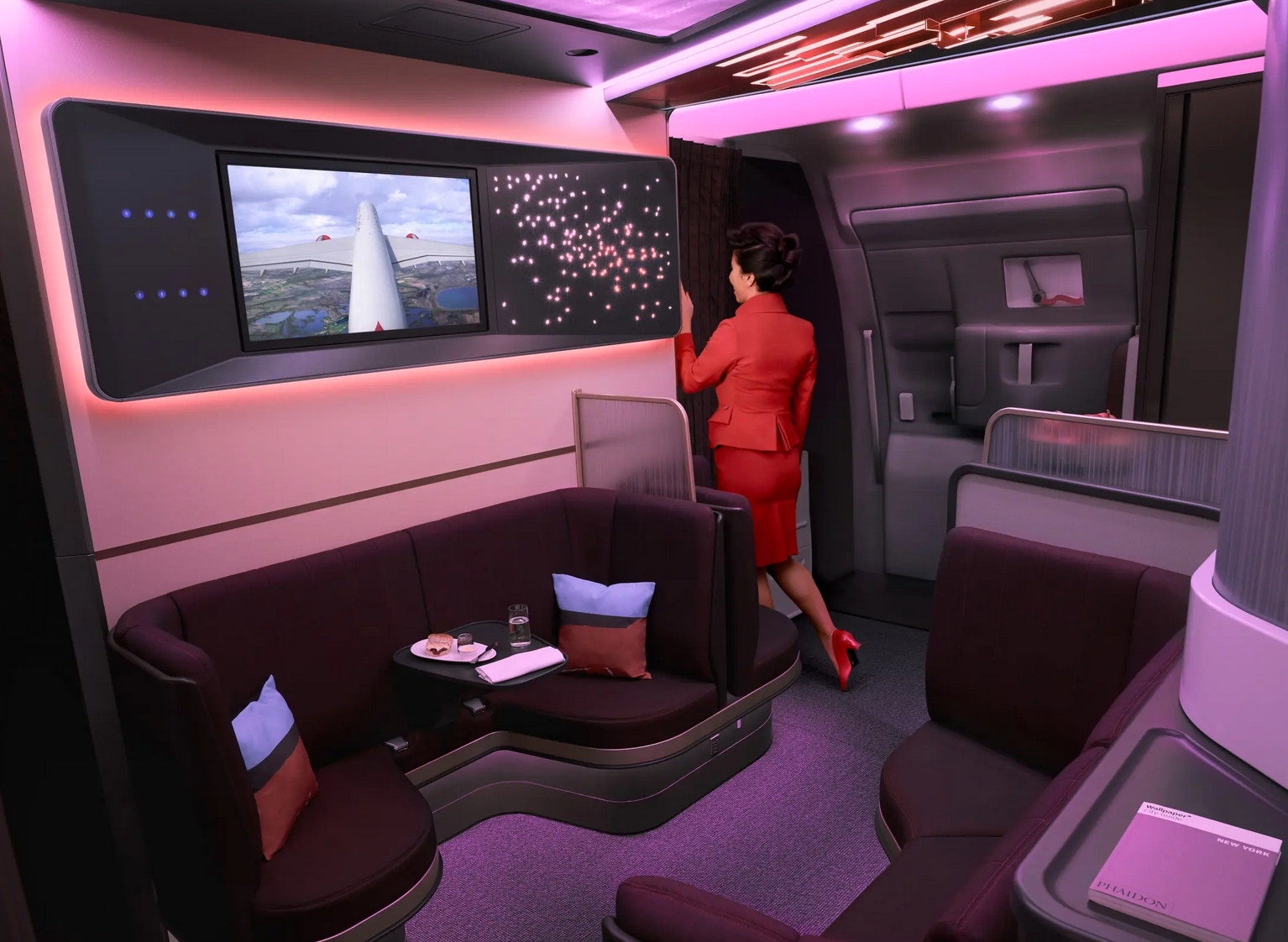 The Booth also features two 27-inch touch-screen monitors, allowing flyers a “window into fully immersive experiences”. Content will be “continuously updated, tailored to the route and time of day”, says Virgin Atlantic, meaning that the “look and feel of The Booth will evolve over time”.

Initially, content will include a digital art gallery featuring up-and-coming artists, and live footage from the tail and belly of the aircraft. There are also two Bluetooth audio jacks, meaning customers can connect headsets listen to the audio.

The A350-1000 will fly to other leisure destinations including Barbados in 2022. The new seat configuration offers 397 seats in total, 16 Upper Class suites, 56 Premium seats and 325 in Economy.

Alongside the Booth, the A350 sports the airline’s latest Upper Class suite design, which all face a window, have 44 inches of legroom and convert into a fully flat 82-inch-long bed.

Corneel Koster, chief customer and operations officer at Virgin Atlantic, says: “We’re famous for our on-board social spaces and the introduction of the Booth elevates the customer proposition for our leisure travellers to new heights.

“We love creating brilliantly different experiences, which is why we’re always evolving our ideas to offer something different and exciting in the air and on the ground.

“I’m delighted that we’ve curated the Booth specifically for our customers jetting off on holiday to our sunny destinations, such as Orlando, offering a truly stylish start to their trips.”

Lady Emmeline (G-VLIB), which is inspired by the leader of the women’s suffrage movement Emmeline Pankhurst, will follow in April 2022, completing the series with three planes set to be delivered by June 2023.

The aircraft, powered by Rolls-Royce Trent XWB engines, continues Virgin Atlantic’s investment in a more sustainable fleet. It’s designed to be 30 per cent more fuel and carbon efficient than the Boeing 747s it replaced and is expected to reduce the airline’s noise footprint at its airports by more than half.