Island Poké: why Hawaiian street food is trending in London

The Hawaiian raw fish dish of poké is taking off in a handful of new forward-looking restaurants across the capital. Ben Brown reports from the counter of Island Poké.

Swings instead of chairs, watermelon juice and a menu of fresh fish. New London restaurant, Island Poké, is the closest thing to a Hawaiian beach hut this side of the Atlantic.

On a chilly, late October morning, James Gould-Porter, the co-owner, is telling me his childhood stories of Hawaii that inspired the new joint, the thrill of buying fresh poké from street vendors and eating it right there on the beach when he was just nine years old.

I’m half listening, half eyeing up the succulent raw tuna and salmon taster bowls they’ve laid out on the counter, complete with fresh pineapple, nuts, and an orange vegetable I can’t quite identity. “Golden beetroot,” James tells me, before continuing passionately about the quality of fresh fish they choose to serve. 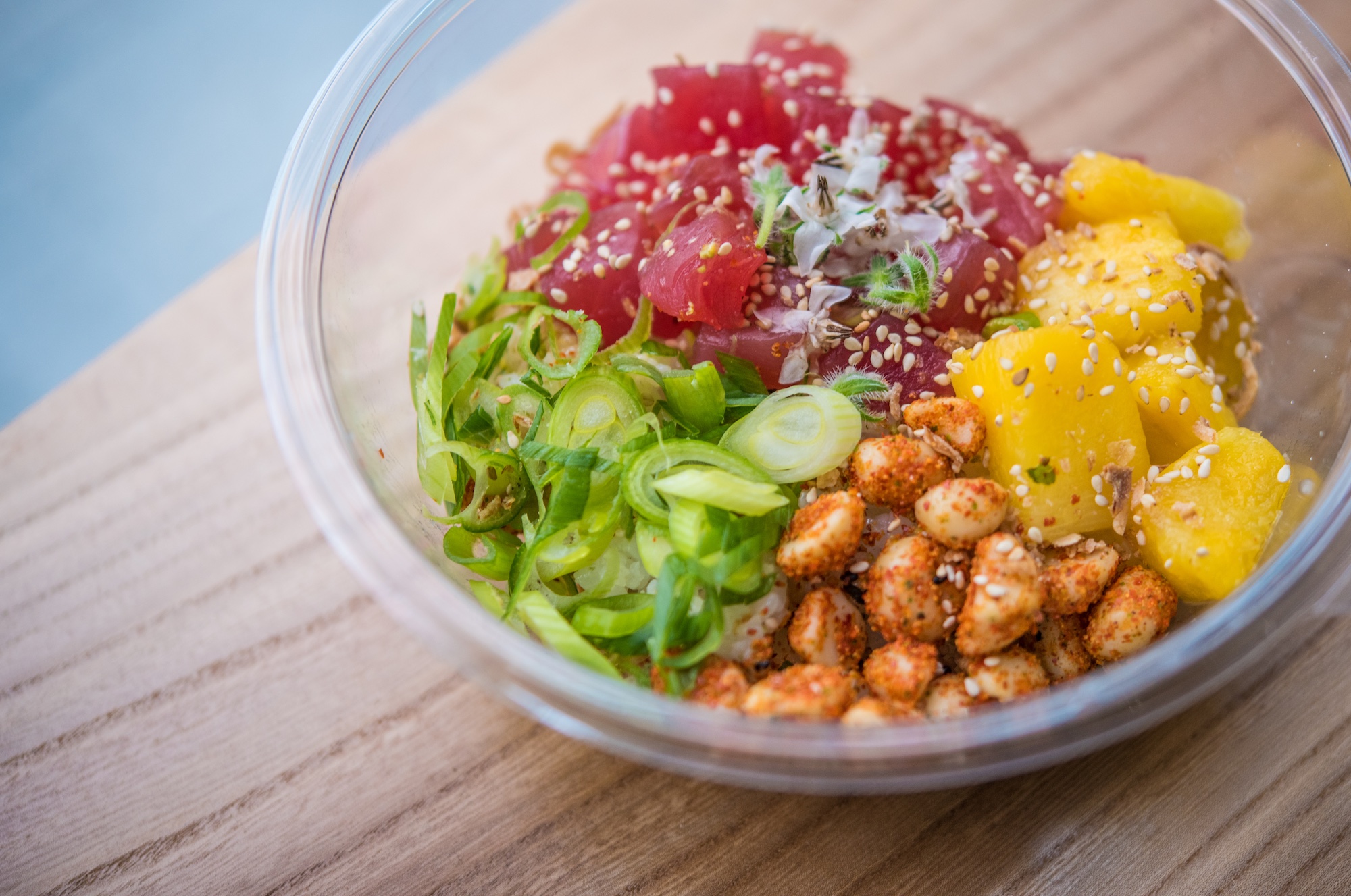 I’m here because there’s a flicker of a new culinary trend in the heart of London: poké. Pronounced poh-kay, this sashimi style dish is a Hawaiian delicacy and a ludicrously healthy street food.

The restaurant opened its doors in late October, inviting Londoners to BYOB – “Build Your Own Bowl” – with delicious fresh fish and Hawaiian flavours, all in a take-out, street-food fashion.

At first glance, poké is like deconstructed sushi; cubed fish on a bed of rice, soy sauce and sesame. However, a closer comparison is ceviche. James is quick to point out the difference. With ceviche, the raw fish tends to be cured in citrus juices, leaving it with a sharper, citric taste. Poké is simply cubed and served, allowing the fish to take centre stage.

The beauty of poké is its simplicity. Even its name is simple, derived from the Hawaiian verb “to cut, or slice”.

The dish itself is light and vibrant, bursting with fresh tropical flavours. The fish is soft and fresh. It comes complete with hot sauce (optional) and crunchy macadamia nuts (recommended), washed down with watermelon juice. For a brief moment, I forget we’re in London – a transcendent feeling that James and co-owner Tom have worked hard to create. 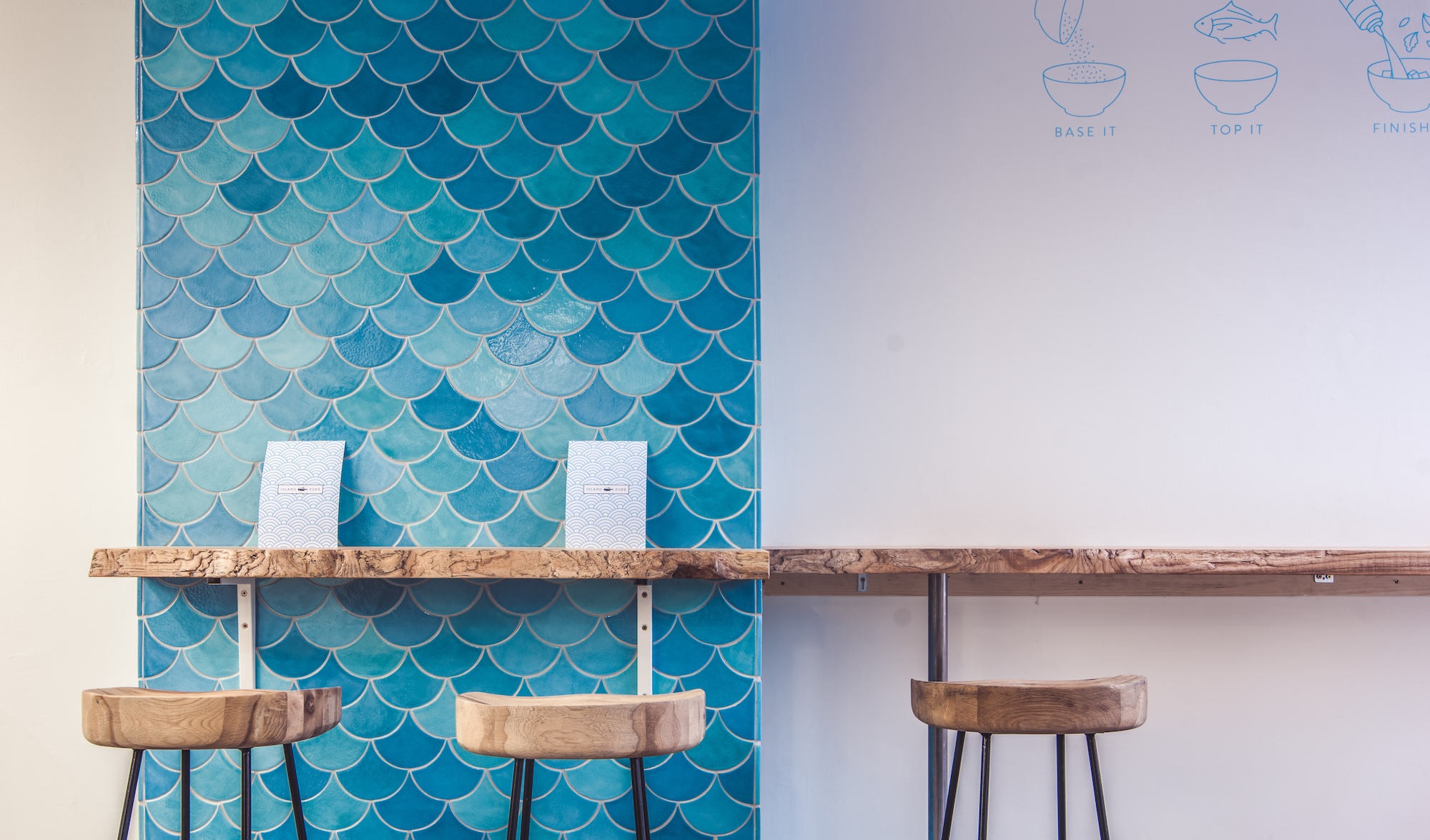 In Hawaii, poké is everywhere. It’s served at beachside huts by street vendors. It’s in grocery stores and restaurants across the island. In Hawaii, poké is not a trend, it’s an ingrained part of the culinary culture.

Only last year did the dish begin to make its way to California, where James was born, with half a dozen shops opening in LA. Island Poké is among the very first to bring it to the UK. 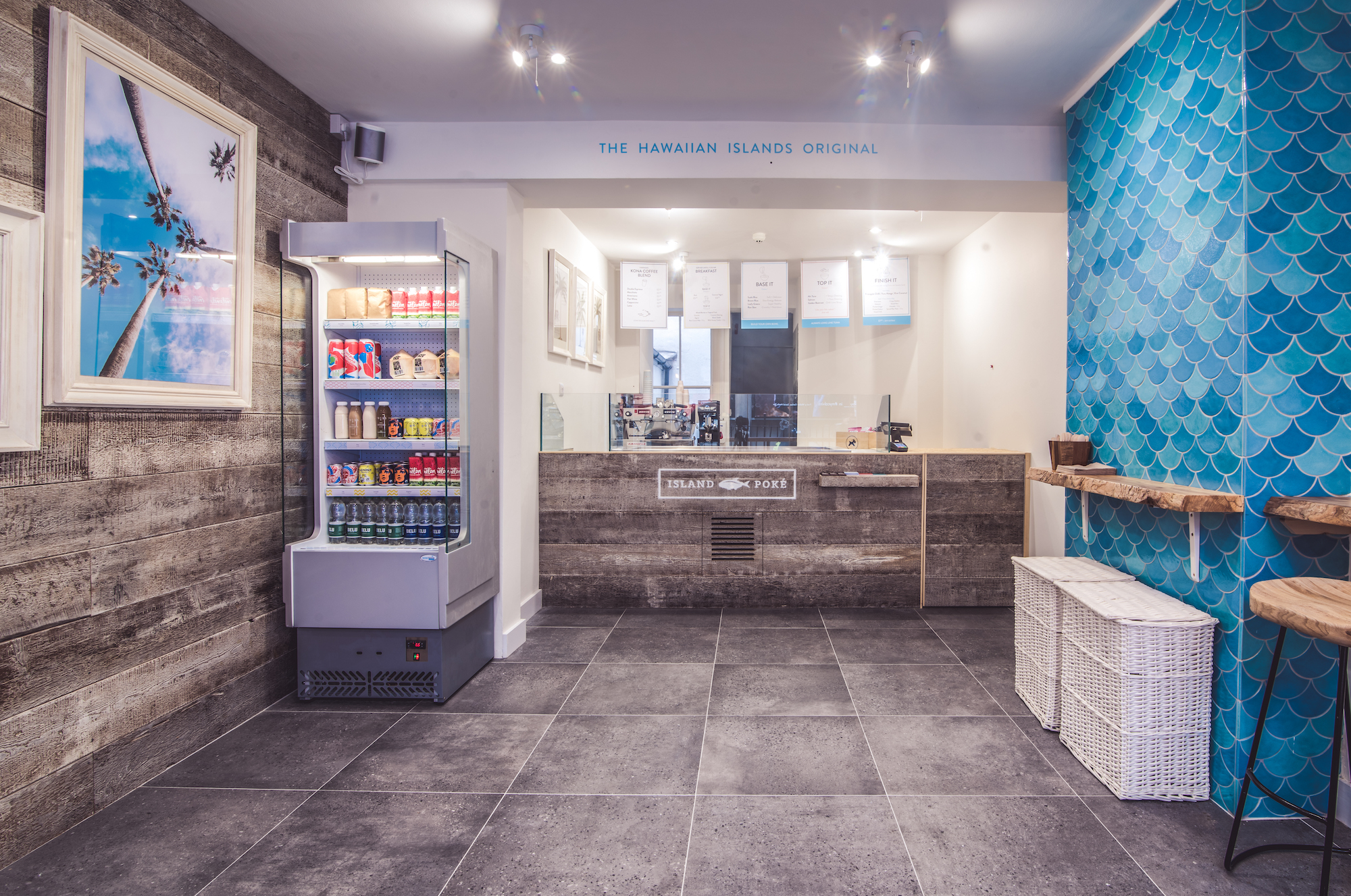 In a stroke of genius, Island Poké forgoes the traditional restaurant or cafe setup, and takes the dish back to its Hawaiian street-food roots. Its space on Kingly Street, just off Carnaby, is open – almost sparse – but welcoming.

There are no tables, just stools, benches, and cushioned swings hanging from knotted ropes. The only thing missing is a hammock. 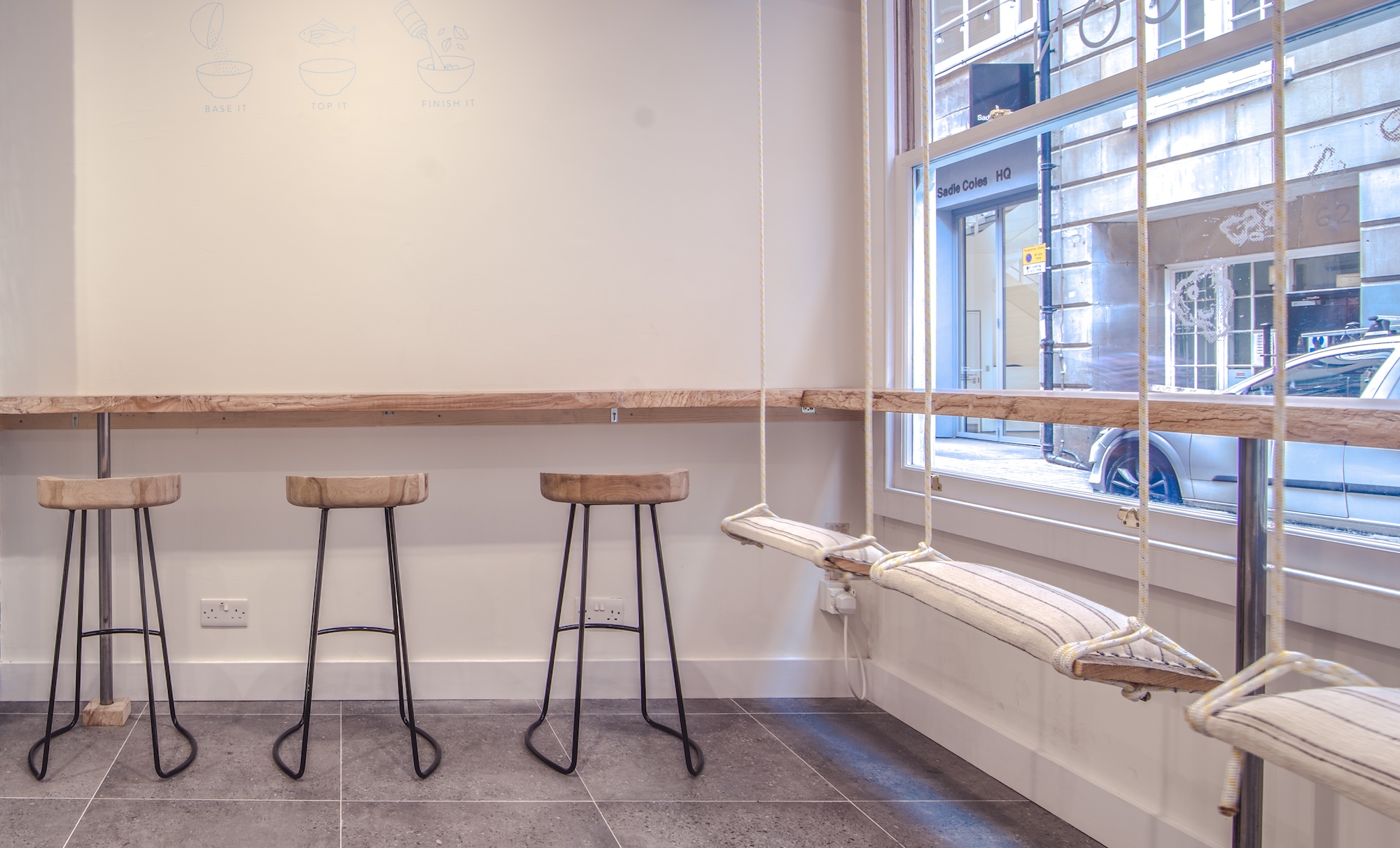 Customers are invited to choose a base of white or brown rice, topped with either fresh salmon or tuna. The rest is up to you; choose crispy kale, baby greens, golden beetroot, mango salsa, nuts, avocado and seaweed. Top it all off with a dash of sauce and you’re good to go.

The bowl costs less than £8, making it an affordable, healthy, and tasty lunch option in central London.

A surprise treat is their breakfast dish. Island Poké will open from 8am every morning, serving acai breakfast bowls. Foodies will already know the health benefits of acai, and Tom and James are quick to praise their superfood qualities. “The area the berries grow in Brazil has one of the lowest cancer rates in the world, and they attribute it to acai berries.”

Island Poké’s acai bowls come with a choice of coconut yoghurt, bee pollen sprinkles, granola, fruits and berries. Aside from the health benefits, it is rich, fresh, delicious and – as one of the other guests tells me – the perfect hangover cure.

The boys also serve a Hawaiian Kona coffee to help kickstart the day.

Will poké catch on in London?

Poké is quietly establishing itself in London, at both food markets and restaurants. At the luxury end, Poké can be found at Black Roe restaurant in Mayfair, but it’s a very different experience to Tom and James’ street food. 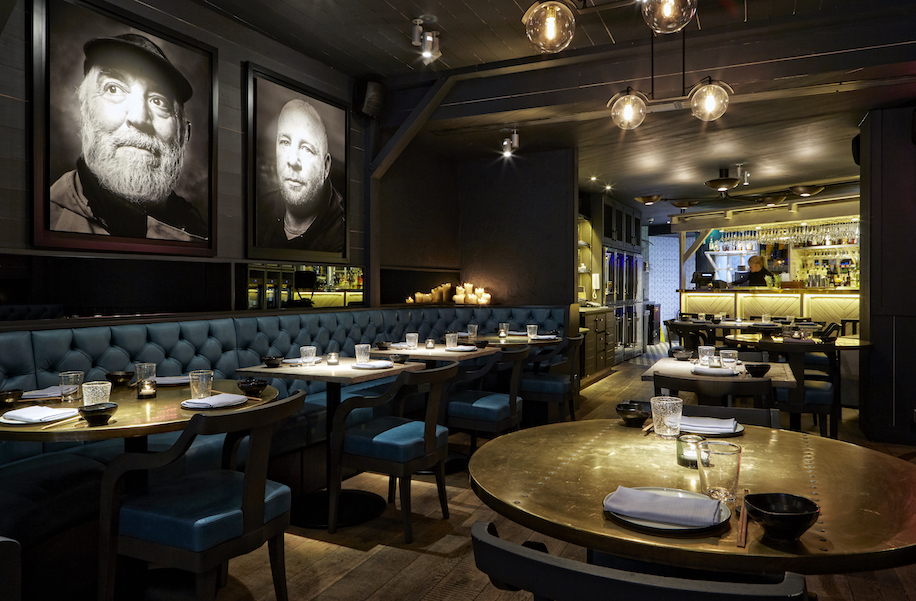 Here, the dish is stylish, refined, and elegant, served in a mood-lit restaurant in London’s West End. 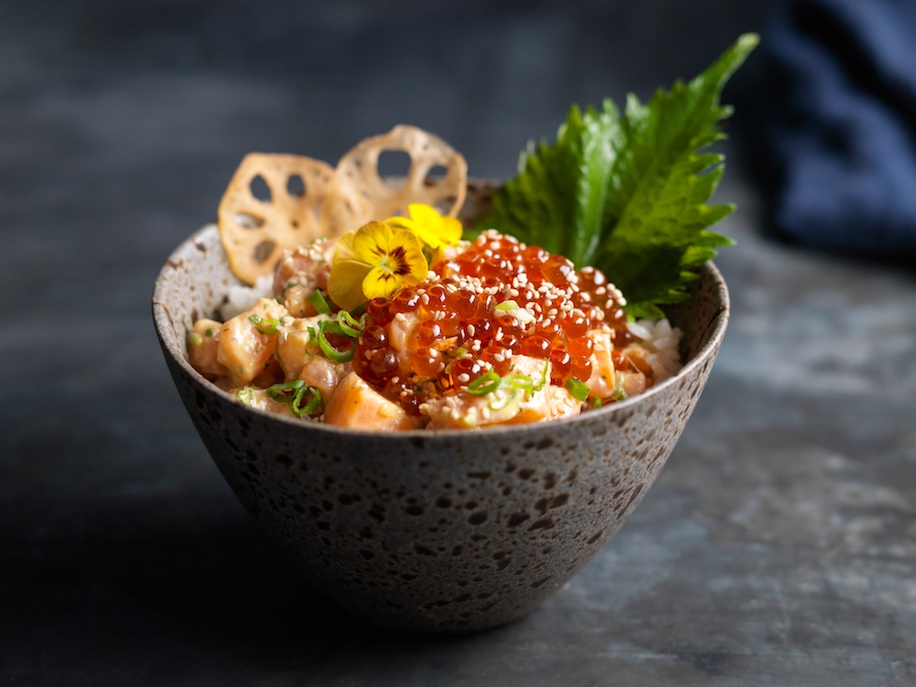 Poké stalls are also cropping up at Kerb street food markets in Camden and King’s Cross. Even Pret a Manger is jumping on the band-wagon with a poké-inspired “sushi-salad”.

If the growth of poké restaurants in LA is anything to go by, London is about to see a handful of copycat cafes and restaurants pop up. So long as they retain the delicate flavours and commitment to fresh fish, that’s okay with us.