Such great heights: the rise of urban exploration 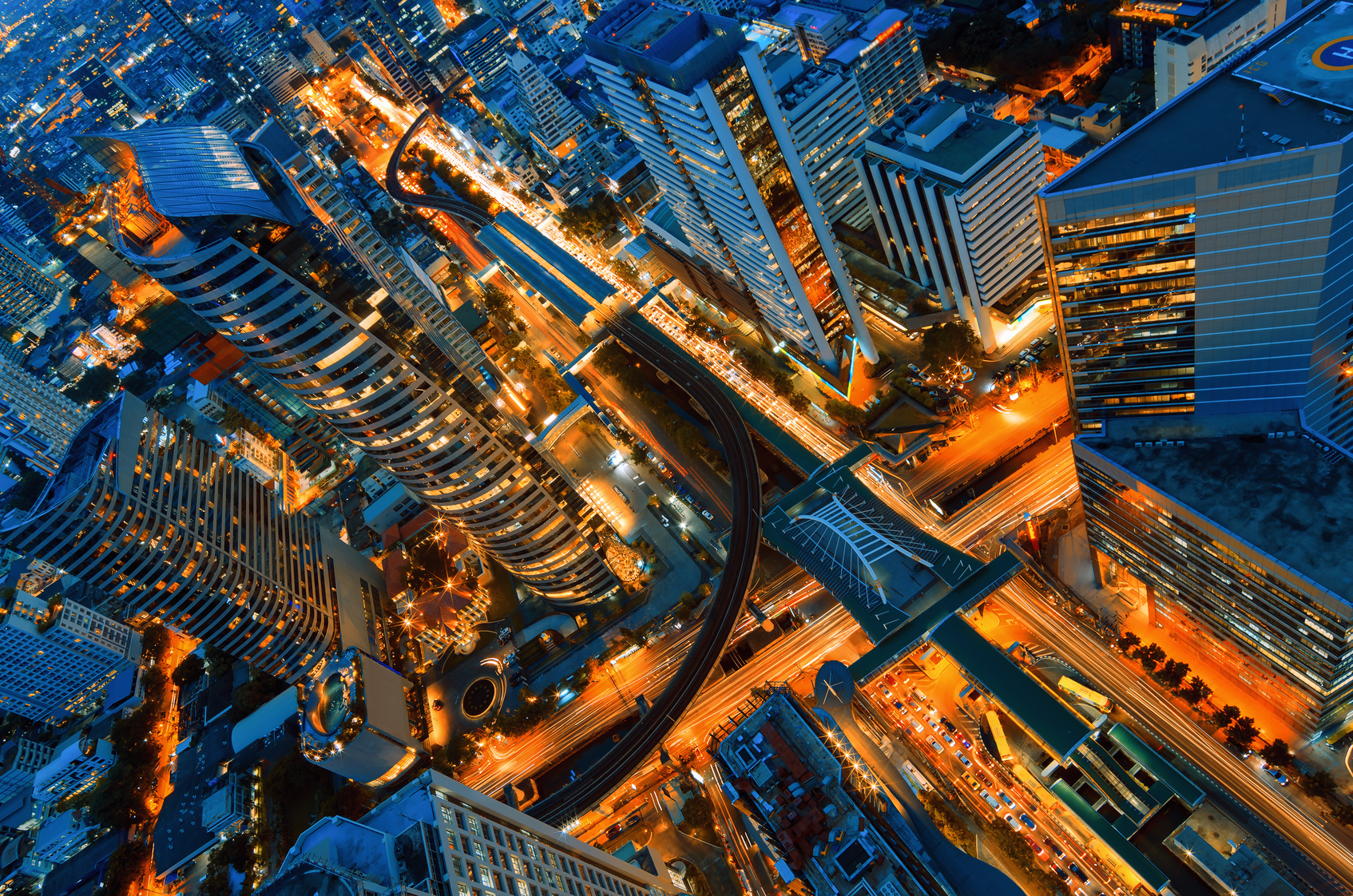 After climbing to the top of a derelict residential tower in Bangkok, Jack Southan gives an inside view of what’s fueling the growing trend for urban exploration, or ‘urbex’.

It’s three in the morning and I’m scrambling over a spiked wall in the very heart of central Bangkok. My bag, filled with gear, catches on a rusted shard of metal poking from the crumbled concrete as I jump down. It puts me off balance and I land badly on the uneven ground. The others pull me behind a bush just as the guard sits up from his bed, suddenly aware of someone in the gloom.

I peek through the branches at the twenty or so wild dogs between us, the guard, and the entrance to the tower. One by one the ragged mutts start to stand with an air of suspicion and purpose. I don’t fancy getting savaged tonight, not by these dogs, and especially not the night before I return home after so long.

A torch light flicks past us, scanning the cover around the gates. We stay still for a few minutes more, trying to weigh up our options – 20 or so mean-looking dogs, an armed guard and no real chance of making it through a window before being caught. Not ideal odds.

Luckily for us we’re in Thailand, and there’s always another option. We gather ourselves together and walk out in the direction of the guard. He’s sat up on a flimsy metal camp bed, face harshly illuminated in the dark by his black and white TV, which teeters precariously on a stack of packing cases. The volume is turned up full and is rattling the panes of glass at his back.

“Hyoot!” He shouts, standing up and scattering potato chips across the floor. We stop. After a moment we move forward and explain we just want to go and take some pictures inside, that we’ll be out in an hour or two and won’t do anything that could get him in trouble. He’s reluctant, but after we suggest he grabs a coffee (and offer to pay twenty times the price) he becomes much more enthusiastic about the idea and walks off towards the road.

Skirting around the guard’s outside bedroom, and keeping well clear of the waiting hounds, which are looking more and more aggressive with every passing second, we push through the glass doors and on into the pitch black of the building’s empty foyer.

Urban exploration (also known as “urbex”) isn’t exactly a new phenomenon but it is growing in popularity. In part this is because of the increase in vacant, dilapidated and abandoned buildings, left to rot as economies have collapsed over the last 50 years (just look at cities like Detroit).

But it is also taps into humankind’s innate desire to conquer, to feel like the first person on Earth to have discovered something. You can also easily gain recognition and respect for urban exploration through social media platforms such as Instagram.

The number of daredevil explorers posting images from deep inside Cold War-era missile silos or atop vast skyscrapers is increasing exponentially. New accounts appear on Instagram every day – professional statistics site fowllow.com shows there are more than one million photos tagged with #urbex.

These beautifully mysterious images capture a new breed of urban pioneer, all vying to outdo one another in the battle for kudos. Often with the aid of a selfie-stick.

But don’t get me wrong, I love it. I’m one of them. Or at least I try to be. I think it’s the idea that you can rediscover a place after being forgotten for so long, like urban archaeology. In Japan they call these desolate infrastructures haikyo, which literally translates as “ruins”, but for me they are much more than that because they still hold the story of time, clear as day.

It’s difficult to tell how many floors we’ve climbed, it’s dark outside so there’s still no point of reference. It’s stiflingly hot in the little service shaft we’re working our way up, that’s all I know. But by my calculations we must have done thirty or forty storeys by now.

Most things have been left exactly as they were many years previously. Plastic film peeling off work surfaces, toilet bowls sitting in empty bathrooms, still waiting to be plumbed in. I drag a finger along a shelf in the bedroom of one apartment, leaving a pathway through the thick dirt and brush it off on my jeans. Nothing has been touched in so long. It’s a spooky place, like it had all been abandoned in such a hurry, without any prior notice.

Pushing myself over the top of a barricaded doorway and through a tight gap to the next space, I feel a change in the atmosphere. The air is cooler than the lower areas have been, fresher even. I throw a glow stick down the corridor into the blackness. It lands with splash instead of a thud and disappears almost completely, but for a faint refracted glow. The floor is flooded, which is unusual considering we’re probably 300 metres above ground.

Working my way along raised ridges in the concrete, to avoid the murky water, I head to the furthest room. I can see silhouettes against the glow and there’s an unfamiliar resonance, which grows louder with each step forward. I reach my friends at a broken window and, looking beyond them, I see something quite spectacular – a tropical storm of biblical proportion raging across the sprawling city.

Water is pouring in around me and beating mercilessly against the glass panes either side. Lightning flashes down in forks across the entire horizon, illuminating the eerie service space we’re sheltering in.

I look at my watch: It’s almost 5am. Sunrise is in about 30 minutes and the view from the roof will be amazing. I leave the refreshing dampness of the rain and begin negotiating the maze I find myself in. A mass of industrial pipework, cavernous ventilation shafts, ladders leading to concrete rooms with no doors, and halls filled with row upon row of industrial circuit breakers. The only things missing to make the perfect horror movie scene are flickering halogen bulbs dangling from the ceiling.

After 20 slightly nervous minutes, I scramble up the last flight of stairs and see the sky above me through a great hole in the roof. Pulling myself through, I see Bangkok for the first time as it’s supposed to be seen – a glittering metropolis rolling off as far as the eye can see, and a blood red band of light beginning to appear on the horizon to the east. I hop onto the wall and dangle my legs over the edge, I can see the guard asleep far far below. I get my phone out and take a snap for the record, after all it’s not everyday you make it to the top. 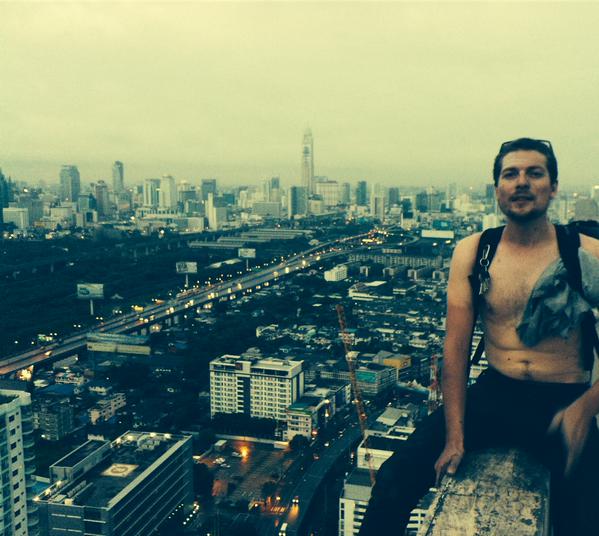 Jack Southan at the top of an abandoned tower in Bangkok